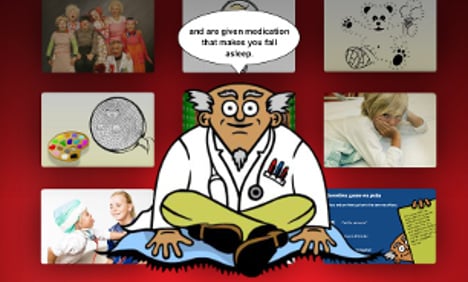 A screenshot from one of the hospital's interactive videos. Photo: TT

Felicia Zander had a brain hemorrhage when she was six and spent more than a year in and out of hospital for x-rays, MRIs and about a dozen operations under general aesthetic.

Before each visit a group of animated characters on the hospital's website described what she would go through and calmed her fears.

She became an avid follower of the "hospital adventures" of Pajette, a clown waiting to get his appendix out and Ville, a 10-year-old wild boar about to have a brain scan.

"It helped me understand better, to prepare for it… it calmed me," she said.

"Having an anaesthetic is frightening but it's not actually dangerous," she added with a smile.

Anaesthesia Web – created by a nurse at Sweden's largest children's hospital – uses videos, games and cartoons to walk a child through what they will encounter during their stay, all the way to the well-earned ice cream in the post-operative room.

The animated tale of Ville, who banged his head on a rock, explains in simple language how his bed will roll towards a "big hole where photos will be
taken of the inside of his body" and that he will have to stay very still.

The stories had a strong impact on Felicia, now aged 10.

"For a while she spent almost every waking hour in front of the computer on the Anaesthesia Web," her mother Maria Zander recalled.

"Before one operation she even asked a nurse if she had (also) looked at the site and knew what she had to do," she said. A shot of the Astrid Lindgren's Children's Hospital. Photo: TT

Zule Sicardi, an anaesthetist at a clinic in central Stockholm, said she had noticed the effect the site has on children arriving for surgery.

"The children who use it are calmer and confident, the situation is familiar to them."

All the material on the site – which is available in 27 languages in text form and interactive material for smaller children in Swedish, English, Spanish and Arabic – was approved by a doctor.

When it was started in 2006 it was the first service of its kind and it remains unmatched, attracting 15,000 visitors per month, mainly from Sweden but also from other countries.

A similar site was started in Canada and there are plans to translate it to Dutch.

The site was the brainchild of Gunilla Lööf, an energetic nurse anaesthetist at Astrid Lindgren Children's Hospital in Stockholm, who saw an urgent need to better prepare sick children and their parents.

"It happened too often that I met anxious parents and children and didn't have the time to reassure them. I wanted that to change," she said.

"And to reach young people you have to go to where they are: the Internet."

According to official figures, virtually all Swedes aged 13 to 21 are regular Internet users and the use of smartphones, tablets and computers among
small children in the Nordic country is one of the highest in the world.

More than a half of all Swedish children have access to an iPad or tablet while about 95 percent of those aged 12 or more own a smartphone.

The biggest challenge she faced was finding ways to present information that would interest every age group.

"The hardest was the adolescents. We used a panel of 10 children aged 10 to 18 and we developed the site based on their experience," said Loof, explaining
that teenagers were given a special part of the site which includes a blog and a chat forum.

She has updated the material for almost a decade on a voluntary basis in the absence of any funding to maintain the service.

Some fear that the site could be left behind as Swedes – particularly young ones – shun computers in favour of tablets and smartphones.

"It's a good tool but it needs more (interactive) languages and it especially needs to be made available on phones and tablets," lamented Per-Arne Lönnqvist, a professor of paediatric anaesthesiology at Astrid Lindgren Children's Hospital.

"Otherwise it runs the risk of not reaching so many people."

But for a generation of Swedes, like young Felicia, it has left a lasting impression.

"It was like I could take control of the situation" she said.