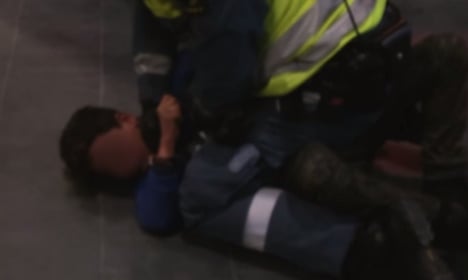 A screenshot obtained from newspaper Sydsvenskan video.
Southern Swedish police confirmed on Friday afternoon that Danish police had found the boy in Jutand, not far from the Swedish border.
"He has been discovered in Denmark," Mats Karlsson, Deputy Police Area Manager in Malmö told The Local.
"I am very pleased he has been found. That was our objective, " he added.
He said that the boy's identity remained unclear and that police in Sweden remained unsure of his nationality.
"This is now a matter for social services. It is up to them and the immigration authority to decide what to do next".
A 12-year-old boy who was believed to have travelled over the border with the nine-year-old has not yet been discovered, although police said they believed he was in the same area.
"We hope he will show up too," said Karlsson.
The news came as police were continuing to investigate claims two security guards attacked the boys at Malmö train station earlier this week. Local newspaper Sydsvenskan obtained a video that appeared to show one of the guards pushing the nine-year-old onto the ground, sitting on him and holding his hands over his mouth. The boy could be heard reciting the Islamic prayer the Shahada ('There is only one God, and Muhammad is his Prophet').
The second guard is shown in the same video clip, restraining the older boy on a bench at the station.
The two children somehow managed to flee the scene eventually ended up in Denmark.
There has been speculation in the Swedish media that the pair are brothers and have relatives in Sweden and may have been at Malmö station searching for their parents or other family members.
But police have been unable to confirm the rumours.