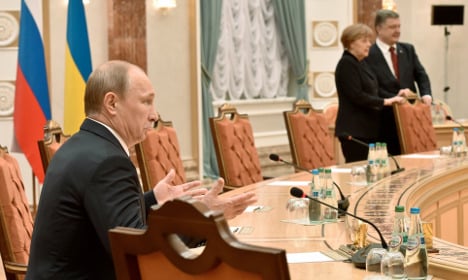 The letter is reported to have been written by the Russian parliament, the State Duma, and sent from the Russian embassy to Swedish MPs and MEPs, according to Swedish newspaper Svenska Dagbladet.

Signed by Duma chairman Sergey Naryshkin, it warns that divisions within Europe and more sanctions, together with the terror attacks in Paris earlier this year, theaten security in Europe.

Foreign policy spokeswoman for Swedish centre-right Centerpartiet Kerstin Lundgren is one of the Swedish politicians to have received the letter. She told newspaper Aftonbladet it felt like a whiff of the old times, saying: “I think it is conspicuous that they with this letter so clearly demonstrate what the political situation is in the Russian Duma. When this type of letter emerges in our reality it is as if something has been dug up from a mouldy basement.”

“It shows that our Russian colleagues are part of the Russian propaganda machine. They are Putin's tools in the propaganda war.”

The letter also says: "The memory of the anti-Hitler coalition soldiers' mutual achievement should not darken our brotherhood in arms and one for us common history of the fight against Nazism. We shall not allow the inheritors of this criminal ideology and those who nowadays stand behind it to sow the seeds of division and alienation in the family of the European people."

Björn Palmertz, analyst at the Centre for Asymmetric Threats and Terrorism Studies at the Swedish Defence University, told news wire TT that the letter is in line with an offensive Russian spin campaign.

“They emphasize the common heritage, that we should all work together at the same time as they completely fail to mention Russia's own actions in Ukraine,” he said.

Although dated at the end of January, the letter has only emerged now. This comes a day after leaders announced on Thursday that a ceasefire agreement for eastern Ukraine is set to come into effect on Sunday, after thousands of people have died in almost a year of fighting in the region.

The deal, reported by The Local Germany and The Local France, was agreed after marathon talks in Belarus between Presidents Vladimir Putin of Russia and Petro Poroshenko of Ukraine, and France's and Germany's President Francois Hollande and Chancellor Angela Merkel.

“It's a step in the right direction,” Swedish Social Democrat Prime Minister Stefan Löfven, who has previously criticized Russia over its involvement in the conflict, told public broadcaster SVT.

Relations between Sweden and Russia have been under strain since last summer's infamous submarine hunt in Stockholm's archipelago. The Local reported in January that Sweden's armed forces estimate as many as four submarines were operating in the area at the time.