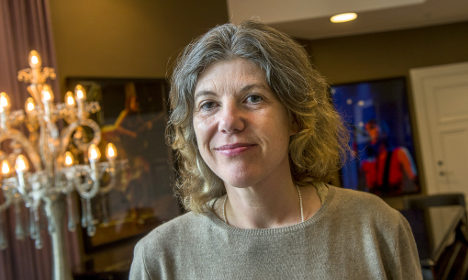 Sigrid Rausing. Photo: Jonas Ekströmer/TT
The 53-year-old, who has lived in the UK for more than three decades, has allegedly avoided paying capital gains tax in both Sweden and the UK by keeping 150 million kronor ($1.7m) in Switzerland.
Currently one of the richest women in Britain, she inherited much of her fortune from her grandfather Ruben Rausing, who invented the watertight cardboard carton that is now a global staple for storing milk and fruit juice. Tetra Pak is now the largest food-packaging company on the planet.
Sigrid Rausing has worked as an anthropologist and publisher and founded the Sigrid Rausing Trust, one of the United Kingdom's largest philanthropic foundations.
She allegedly used a loophole in British law which allows foreign-born residents to avoid paying taxes on assets they hold outside the UK, if they can prove strong enough ties to their former homeland to be considered a 'non resident' in the place where they currently reside. Usually people involved in these kind of cases still have to pay taxes in their home country. But it is claimed that Rausling instead stored her money in a secret bank account in Switzerland on which she was not required to pay tax.
The Local tried to contact Rausing for comment via the Sigrid Rausing Trust but had not heard back by Friday afternoon.
IN PICTURES: Who are Sweden's ten richest people? The iconic Tetra Pak carton. Photo: Pressens Bild/TT
The revelation came days after leaked bank account files revealed that HSBC's Swiss private bank helped customers – including more than 500 Swedes – conceal more than 800 billion kronor in secret bank accounts, according to the Washington-based International Consortium of Investigative Journalists (ICIJ).
The data was obtained through international collaboration between news outlets including Sveriges Radio's news programme Ekot, British and French dailies The Guardian and Le Monde and the ICIJ.
Fredrik Laurin from Ekot said on Friday: "We now see the real billionaires being exposed. This is about the elite, those who live in jet planes, own billions of cash and don't want to participate in the society in which the rest of us live. They employ these shameless Swiss banks and have expensive consultants who use all kinds of tricks to get through various loopholes."
Earlier this week HSBC released a statement to The Guardian stating: "Although there are numerous legitimate reasons to have a Swiss bank account, in some cases individuals took advantage of bank secrecy to hold undeclared accounts. This resulted in private banks, including HSBC's Swiss private bank, having a number of clients that may not have been fully compliant with their applicable tax obligations. "
It added that reforms had been made and more were still to come, writing: "In the past, the Swiss private banking industry operated very differently to the way it does today…We acknowledge and are accountable for past compliance and control failures."