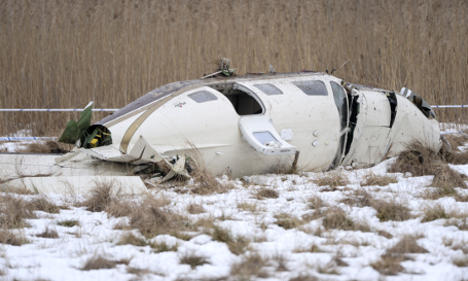 The site of the crash. Photo: Fredrik Sandberg/TT
The small aircraft experienced engine problems immediately after taking off from the airport just after midday.
"They started out, got into trouble and had to make an emergency landing on Björnön," Anders Lännholm told Swedish newswire TT.
"All three have been rescued and are in a fairly good condition," he said, adding that one of the men had complained of back pain.
The plane they were travelling in was a single engine Piper PA-46, Mikael Nilsson, the aiport manager at Västerås airport told Swedish news network SVT.
It was understood to be making a private flight from Sweden to the Czech Republic.
The crash was witnessed by a group of Swedish teenagers who were on a school trip to the island.
"We were really shocked, I've never seen anything like it," Oscar Hammar, 14, told Sweden's Expressen newspaper.
"Both wings had come off and the plane was completely wrecked. Three people were standing outside the plane and one of them was bleeding from the head," he added.
Emergency services were called to the scene and all the passengers were taken to hospital, but were understood to have escaped with minor injuries.
Västeras airport is located around 100km west of Stockholm and is also a hub for international commercial flights including Ryanair services to London.