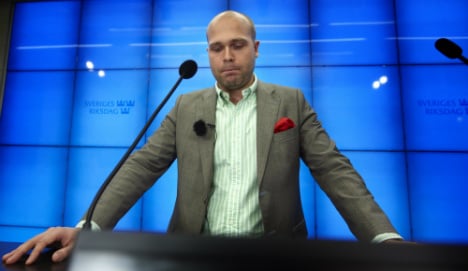 Erik Almqvist resigns from parliament. Photo: TT
According to a report in the Dagens Nyheter daily, Almqvist has a central role in the Sweden Democrats (SD) media project Samtiden and is in control of what is published.
"I have not had any influence over what is published," the magazine's official editor Jan Sjunnesson told the newspaper.
Almqvist, once regarded as party leader Jimmie Åkesson's crown prince, officially left the party in disgrace after the so-called iron pipe scandal became known in 2012. Until then he had served as the party's economic policy spokesperson.
Seen as one of the early victims of Jimmie Åkesson's "zero tolerance" policy on racism in the party, Almqvist resigned his parliamentary seat and all his assignments for the party. At the time it was announced that he would continue in a consultancy capacity for SD's media projects.
But according to Dagens Nyheter's report, Almqvist's influence extends far beyond a mere consultant role and in fact he is the driving force, dictating editorial policy and furthermore writing several articles under a pseudonym.
"The management knows that it is Erik Almqvist who controls content,"  Sjunnesson said.
Erik Almqvist, who in recent years has been resident in Budapest, declined to comment on the report, referring questions to the management of Samtiden AB, a company which is wholly owned by the party and is chaired by MP Martin Kinnunen.
Kinnunen conceded to the newspaper that Almqvist has had a larger role than first planned.
"We have been forced to have an intermediary and that's not something we wanted. We hired an editor and then we discovered that he was unable to have the last call on articles," Kinnunen said.
When the project was launched then party secretary Björn Söder stated clearly that Almqvist "will not be the publisher or the editor, but will be working on the infrastructure".
The iron bar scandal dominated the news in late 2012 after a video published in November by the newspaper Expressen showed Almqvist and his colleagues, Kent Ekeroth and Christian Westling, hurling racist abuse at comedian Soran Ismail and others.

The clips also show the three top SD politicians pushing a drunken man and a young woman, using words like "darkie" and "whore". The trio then appear to arm themselves with iron bars.