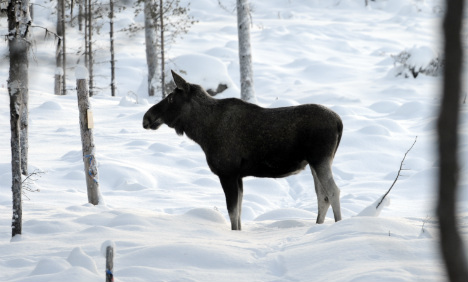 Elks prefer cooler climes. Photo: TT
While many (human) Swedes habitually head south for the winter to enjoy a little more sunshine and warmth, the elk population in southern parts of the country could head north if climate change forces up temperatures, experts warn.
"If it continues to get warmer in Sweden then the elk will move north," said Göran Ericsson at the Swedish University of Agricultural Sciences to the local Kvällsposten daily.
The warmer average temperatures are furthermore attracting new species to the southern parts of Sweden which increases competition for food, the second main factor which may trigger a northern elk migration.
"The reduced diet affects the milk which the elk ingest. A less nutrient-filled milk makes it harder for the calves to survive," Ericsson said.
The beasts, which can weigh in at more than 500 kilogrammes, are also confronted with problems to regulate their body temperature and are forced to devote more energy to keeping cool, further exacerbating the problem.
Ericsson argued that the solution to keeping the elk population thriving in southern Sweden is to maintain the forests which are threatened by the timber and paper industries.
"The forest is a refuge for the elk when it becomes too warm. We can perhaps expect smaller elk, with calves which are better able to adapt.
Sweden's total population of elk is estimated to be 300-400,000. While they are seen across the entire country, the largest populations are in Bergslagen and Dalarna in central Sweden.