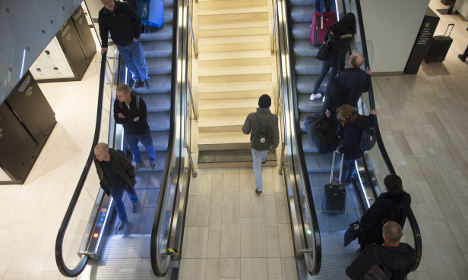 Some escalators at Stockholm's Central Station have been turned off. Photo: TT
Eleven stops were affected including T-Centralen (Central Station), Hornstull and Rådmansgatan, with Stockholm transport network SL saying it was unclear when the escalators would be switched on again.
The decision to turn off the escalators came after a woman fell through a broken step at the Östermalmstorg stop over the weekend and ended up getting trapped for more than 90 minutes.
She was later taken to hospital and treated for leg injuries.
"We must find out what caused this accident before we dare to start our escalators again," Suss Forssman Tullberg, a press officer at SL (Stockholm's transport network) told Swedish newswire TT.
He said that extra staff had been brought in to monitor passenger safety at stations in the meantime and warned commuters to avoid the affected stations where possible.
"Allow plenty of time and please help out fellow travellers who have problems," he said.
On Monday afternoon Swedish broadcaster SVT said it had seen an email sent to staff working for MTR, the company that operates the escalators last week, suggesting that some of the network could be affected by a manufacturing defect.
But MTR insisted to the broadcaster that the escalator affected at Östermalmstorg was not considered to be a risk ahead of the accident and insisted that it had been closely monitoring all relevant escalators at the time.
"The 'accident escalator' was not included in the supervision plan," said Åsa Elm.
The company said it had previously wanted to avoid switching escalators off to avoid overcrowding.
The stations still affected by the temporary shutdown are: Hötorget, Rådmansgatan, Odenplan, St Eriksplan, Östermalmstorg, T-Centralen, Slussen, Mariatorget, Zinkensdamm, Hornstull and Skanstull.