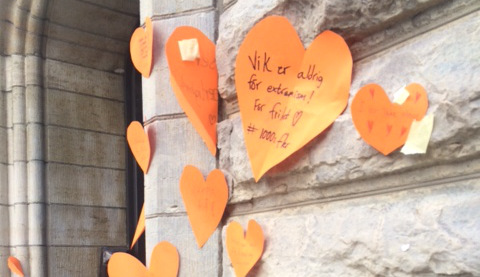 Love messages outside the Danish Embassy in Stockholm on Monday. Photo: The Local
Bright orange hearts are pinned to the walls of the Danish Embassy in Stockholm on Monday. One written in Swedish reads: "We are behind you Denmark", another simply says "kaerlighed", the Danish word for "love". Flowers and candles are scattered on the pavement.
The mood is calm; none of the bold banners or gatherings of free speech protesters witnessed outside the Danish Embassy in Paris over the weekend.
But what has happened over the border in Denmark has nevertheless sent shockwaves through the more than 43,000-strong Danish community in Sweden. Denmark is the tenth most common birthplace of immigrants to the neighbouring Nordic nation.

"I absolutely think that Sweden could be hit next," says Tobias Würtz, 28, a Danish music producer based in Stockholm.
"The Swedes are generally softer than the Danes and that goes for immigrants too I think. But I can see the very hard, strong extremism we've got in Denmark spreading over the border."
His concerns are echoed at Tva Sma Svin, a Danish restaurant in the Swedish capital.
"Everybody is worried. We were already worried after what happened in Paris," argues manager Jimmy Nygren.
"I have nothing against any religions and I want the different groups here to be able to behave freely. You do feel that something could happen any day in Sweden though as it is so close to Denmark".
LIVE: Read the latest updates and analysis on the Copenhagen attacks
For Sweden's Jewish community, the second attack in Copenhagen – which took place at a synagogue – comes amid already rising concerns about anti-semitism in the wake of death threats against a rabbi in Gothenburg, growing violence against Jews in Malmö and a flurry of hateful emails and letters from Islamists sent to prominent Jewish figures in Stockholm.
Since the terror attacks in Paris last month, private security has already been beefed up at synagogues and Jewish community centres around the country.
John Gradowski, head of communications for Stockholm Synagogue, is among those now lobbying for tougher action from Sweden's politicians.
"This has been a hard blow to the Jewish world. First Paris, then Belgium, then Denmark. We do feel threatened in Sweden," he tells The Local.
"We are talking to officials here in Sweden about how we can get better protection, because at the moment we are incredibly worried and we are having to pay for extra protection ourselves. We don't need nice words any more, we need action."

Sweden's Home Affairs Minister Anders Ygeman speaking on Sunday. Photo: TT
On Sunday, Sweden's Home Affairs Minister Anders Ygeman told Swedish newswire TT that he was committed to strengthening security and confirmed that discussions were taking place between the government and religious groups.
“In the short term the police will increase their presence, but over a longer period of time we need to work together with the religious groups to help all Jews living in Sweden feel safe and secure,” he said.
He has previously spoken to The Local about his concerns that European security services need to improve cooperation to prevent future attacks.
"We are working hard to exchange information, but there are still some obstacles. There is a discussion about trust and knowing if you can really rely on security services from other countries to use information in an appropriate manner," he said in January.
"We must not let the dark forces win. I can understand why people are concerned, but we are doing everything we can to prevent actions like these. We should not be afraid and we should not be silenced," he added.
Muslims in Sweden are also raising concerns about their safety in the wake of attacks on several mosques around the country over the winter and fears of retaliatory violence following the terror attacks in Paris and Copenhagen.
On her way to university after prayers at Stockholm's main mosque on Monday afternoon, one 20-year-old woman who asks to be known simply as Dina tells The Local: "As a devout Muslim I believe that nobody has the right to kill anybody. But these days anything can happen. And whenever I put my veil on I am prepared for the worst. But I know that God will protect me if someone decides to retaliate"
Another Muslim, Mohammed, who is also too afraid to give his surname adds: "It's important to keep distinguishing terrorists from Muslims. Someone that kills or shoot another person is not a Muslim, a Jew or a Christian. They are a killer. Religion doesn't teach people to kill."

Mohammed, 28, says Muslims in Stockholm fear reprisal attacks. Photo: The Local
Despite deep concern from some communities, a poll commissioned two weeks after the Paris shootings suggested that just one in three people living in Sweden believed there was a 'fairly high risk' of Sweden being targeted by extremists. In a similar survey in Paris, the figure was closer to nine out of ten respondents.
Sweden has only experienced homegrown terrorism once in recent years, with a suicide bombing in central Stockholm in 2010.
But with the Swedish cartoonist Lars Vilks thought to be the target of the first shooting in Copenhagen on Saturday, the possibility of a future attack in Stockholm is once again a hotly debated issue.
"I am a little bit scared," says Alexandra, 28, a dentist from Belgrade who The Local meets in the capital's old town on Monday afternoon.
"I think you can't be sure if anything will happen or not anywhere you go. I don't let it stop me from going places, but I am a little bit scared, just a little." Alexandra is from Belgrade but is visiting Stockholm. Photo: The Local
But her views are strongly rejected by two German students visiting the city.
"It's very peaceful here. I'm not scared," says Linda Jaeck, 18, from Stuttgart.
Philip Stoeckenius, 22, adds: "I think you should start thinking about where terrorism starts and stop discriminating religions. No, I'm not scared."
Additional research and interviews by Emma Löfgren and Odessa Fardipour
Url copied to clipboard!