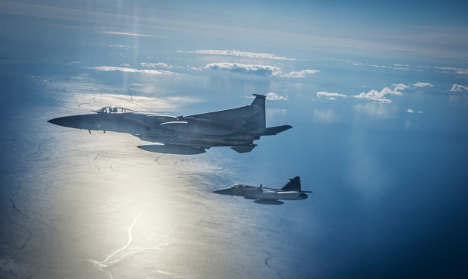 Sweden is to take part in a military exercise over Östersjön in spring. Photo: Yvonne Åsell/SvD/TT

A memorandum from the Swedish foreign ministry obtained by newspaper Expressen reportedly states that “no Swedish planes would land in Estonian territory and the same applied to Finland”.

Referring to a meeting between Russian ambassador Viktor Tatarinsev and foreign ministry cabinet secretary Annika Söder, it goes on to say: “Tatarintsev appeared to find the reply satisfying”.

The planned military exercise is to take place in the Baltic region in March and April this year, on the initiative of the United States. The background is said to be increased Russian activity in the area.

But Russia has expressed concern over Sweden and Finland's involvement, according to Expressen. The memorandum states: “That these militarily alliance free states co-exercise with the United States could not leave Russia indifferent.”

The memorandum further reveals that Swedish and Finnish foreign secretaries Margot Wallström and Erkki Toumioja have discussed the exercise.

However, Wallström late on Sunday denied this, according to Expressen. In an email to the newspaper she said: “The exercise is under the remit of the Swedish Armed Forces and the Defence Department. Any questions about the exercise should thus be put to them.”

Relations between Sweden and Russia have been under strain since last summer's infamous submarine hunt in Stockholm's archipelago. The Local reported in January that Sweden's armed forces estimate as many as four submarines were operating in the area at the time.