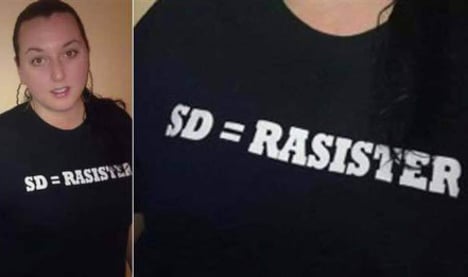 Petra Lindroos Johansson. Photo: Kristineham municipality
Petra Lindroos Johansson, who is a politician in Kristineham municipality, showed up to a photoshoot for locally elected politicians wearing a navy blue top which appeared to criticise the anti-immigration Sweden Democrat party.
The move followed a similar stunt in Sweden's Rikstag by Left Party Member of Parliament Rossana Dinamarca last autumn, which sparked accusations of hate speech, although Sweden's Attorney General threw out the case.
Johansson told The Local: "I chose to highlight the fact that the Sweden Democrats are a racist party by wearing that shirt. SD has for years normalized, racism, sexism and homophobic views."
She said that she had written to her party in advance of the photoshoot to ask permission to wear the T-shirt but did not get a response.
Paul Brännlund who leads the area's branch of the Sweden Democrats told The Local on Monday: "If she wants to wear her political opinions on her shirt she is free to do so. I'm not the least bit offended, because I'm not a racist. I did mention to her that it was inappropriate to wear the shirt and she responded that we live in a democracy and that she has a right to express her opinion."
The municipality has retouched the photo for its website to eliminate the slogan.
"It's no good if someone wears a text showing a political message or propaganda," council leader Ingrid-Marta Grønlie who is from Prime Minister Stefan Löfven's Social Democrat party told Swedish newspaper Metro.
"We have decided that the text is inappropriate… This is about respect towards local residents," she added.
"I respect the presiding committee's decision to retouch my shirt but I don’t agree with it. I think it’s crucial that the we stand up for equality and start normalizing anti-racism and unite against inhumane views," Johansson told The Local in response.
The Sweden Democrats scored a record number of votes in Sweden's last municipal, local and national elections in 2014 when they became the third largest political party in the country.