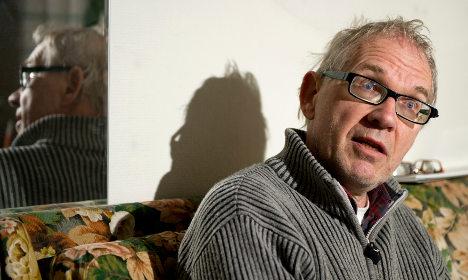 The attacks are the latest in a string of threats against Swedish artist Lars Vilks. Photo: Björn Lindgren/SCANPIX

In an interview with Swedish Radio's news programme Ekot on Monday he described how tense he felt as he heard gunshots at cultural centre Krudttønden in Copenhagen, where the first attack took place.

“It's an unreal feeling. What's going on? I'm not very used to hearing gunshots, they're such strange sounds. But then I understood that somebody was shooting. It was a peculiar feeling,” he said.

BLOG: How the Copenhagen attacks unfolded

The 68-year-old artist escaped unhurt from the shooting at the Copenhagen venue, where he had been hosting a cultural event called “Art, Blasphemy and Freedom of Expression”.

He told Ekot that security staff quickly took him to a separate room.

“I didn't do anything, because I didn't have time to do anything. They pulled me away immediately.”

The controversial artist has previously survived a foiled assassination plot and other attacks since his drawing of the Prophet Muhammad was published in a local Swedish paper in 2007 with an editorial on the importance of freedom of expression.

Vilks lives under police protection. While Danish security forces indicated Saturday's attack had been “planned”, police said it was not clear whether any particular person had been the target. But Vilks said he is not surprised.

“Not when I think about it. But I still travel around a lot and nothing ever happens. You don't think anything is going to happen. When it does everyone is caught off guard.”

“The criticism that may emerge from this is that after Charlie Hebdo there should possibly be more awareness. If we have learnt anything it is that those kinds of attacks can inspire others and I should think that is what happened in Copenhagen,” he told Ekot.

“You shouldn't let murderers walk free. I think most people would agree. And it's even worse if these killers want to negotiate freedom of expression and democracy with the help of weapons,” Vilks added.

Copenhagen Police confirmed on Sunday that the alleged gunman in the dual shooting attacks, the first at the Vilks meeting and the later at a synagogue in the city, was previously known to officers due to his involvement in gangs.

“He is a young man aged 22, born in Denmark, and he is known by police for several crimes,” said the statement.

The man, who was himself killed by police early on Sunday, had a history of assault and of violation of Danish regulations on the possession of weapons, according to the statement, which did not give further details.

Although police did not name the subject, Danish and Swedish media reported it as Omar Abdel Hamid El-Hussein. Subsequent media reports said that the 22-year-old was released from jail only two weeks ago after serving a term for aggravated assault.