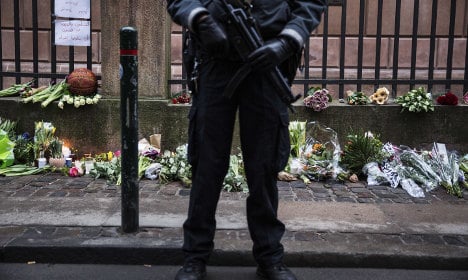 A policeman stands outside a synagogue where one of the attacks took place. Photo: Niels Hougaard/AP Photo/Polfoto

Sweden's Home Secretary Anders Ygeman told news wire TT that a discussion is being carried out between the Swedish government and religious groups to strengthen security.

“In the short term the police will increase their presence, but over a longer period of time we need to work together with the religious groups to help all Jews living in Sweden feel safe and secure,” he said.

The opposition leader of the centre-right Alliance's Moderates party Anna Kinberg Batra also emphasized the severity of the attacks.

She told TT: “We have these past weeks seen several examples of terrorism and violent extremism, also directed at Jewish targets, and it is very serious. Everybody has to be able to observe their faith without fearing violence.”

“We need strong cooperation on a European level between governments and agencies to have sharp action on terrorism ready and to be able to better prevent radicalization.”

BLOG: How the Copenhagen attacks unfolded

Meanwhile, Copenhagen Police confirmed on Sunday that the alleged gunman in the dual shooting attacks was previously known to officers due to his involvement in gangs.

“He is a young man aged 22, born in Denmark, and he is known by police for several crimes,” said the statement.

The man, who was himself killed by police early on Sunday, had a history of assault and of violation of Danish regulations on the possession of weapons, according to the statement, which did not give further details.

Although police did not name the subject, Danish and Swedish media reported it as Omar Abdel Hamid El-Hussein. Subsequent media reports said that the 22-year-old was released from jail only two weeks ago after serving a term for aggravated assault.

The police statement added that the investigation was focusing on the man's movements before, during and after the shootings.

It said investigators were also trying to ascertain if the suspect had received assistance from others.

Police are currently working under the assumption that the man was acting alone when he carried out the twin shootings.

A 55-year-old man, named in media reports as Finn Norgaard, was killed when the attacker opened fire on a cultural centre hosting a debate on freedom of speech on Saturday afternoon. In the second attack, the gunman killed a 37-year-old Jewish man, named as Dan Uzan, outside Copenhagen's main synagogue.

Five police officers were also wounded in the two attacks.

The Local Denmark: Fear and defiance in Copenhagen

Nearly a decade ago, Danes saw the anger that could be caused by cartoons considered to have insulted the Prophet Mohammed.
Protesters as far apart as Palestine, Afghanistan and Nigeria torched the red-and-white national flag after the publication of 12 cartoons of the Prophet in the Danish daily Jyllands-Posten.
The country has also had to grapple with the the problem of radicalized Muslim youths travelling to Syria and Iraq to fight.
In December, the Danish Security and Intelligence Service published estimates that at least 110 jihadists had gone from Denmark. Sixteen of them lost their lives — but others have returned. Last week their Swedish counterpart Säpo confirmed 32 Swedes are believed to have been killed fighting for Isis in Syria and Iraq.
Danish Prime Minister Helle Thorning-Schmidt joined mourners placing flowers outside Copenhagen's main synagogue on Sunday, assuring them that the country has beefed up security.
Emma, a 20-year-old waitress in a cafe on the corner of the street housing the synagogue, said she had been fearful that attacks could eventually be seen on home turf.
"In a sense, we were prepared. We talked about it not so long ago, saying that with the proximity of the synagogue, it could happen there in the street," she said.
"But of course, we did not really believe it."