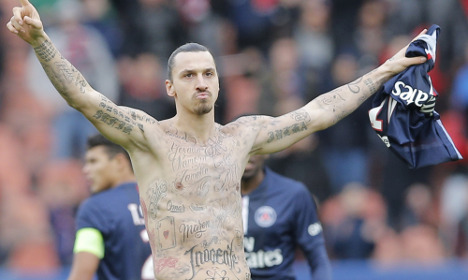 The star striker – who has already had YouTube hits in the form of his Volvo advert and his ribbing of a local sports reporter – took off his team's top as he celebrated scoring the opening goal in PSG's draw against Caen on Saturday.

His already heavily inked torso appeared to show more than fifty new tattoos, with dozens of names joining those of his children. It has since emerged that the gesture was part of his efforts to raise awareness for the UN's World Food Programme.

"Saturday evening against Caen, when I took off my shirt, everyone asked what these new tattoos were," Zlatan Ibrahimovic said in a press conference shown on PSG's website on Sunday. "I had 50 temporary tattoos on my body. They were the names of real people who suffer from starvation in the world.

"Even if the tattoos are gone today, these people are still there. There are 805 million starving people in the world. I want you to see them, through me, to help the World Food Programme," he added.

“I have supporters all over the world. From now on I want this support to go to the people who suffer from hunger, they are the real champions. So whenever you hear my name, you will think of their names.”

The UN's video of him showing off the 'tattoos' – which weren't permanent – had been seen by more than 1.2 million people by Monday afternoon.

"What a legend," wrote one fan on Twitter. "Help the UN World Food Programme".

Other Zlatan sceptics said that their opinion of the footballer had gone up since the stunt.

This man has gone up in our estimation for part in brilliant UN world food program campaign http://t.co/Kb25Q8dHuI pic.twitter.com/X7MnVxrXNv

What a legend (still got booked tho) Help the UN World Food Programme& Zlatan's fight vs hunger @WFP #805millionnames http://t.co/JXaBb8ZIeq

Marina Catena the director of the World Food Programme told reporters on Sunday: "I had this dream that someone would share this message in a simple way, beyond any barrier. We thought of Zlatan Ibrahimovic, who is often asked for autographs. Why should it not be Zlatan, this time, who wore the autographs on his skin?"

It is the first time that the footballer has publicly engaged with a charity.

"We are very proud that he accepted to carry this message and that Paris Saint-Germain helped us organize this project… The challenge of 'Zero Hunger' is not only for humanitarian groups, but should concern everyone; that's the message," added Caterna.

But Paris Saint-Germain coach Laurent Blanc said on Monday that Ibrahimovic was wrong to take his shirt off.
"I knew he was involved with them [The UN World Food Programme] but I personally wasn't aware of the tattoos. I knew there was something planned for after the match but that's all.
"He scored very early on and took off his shirt. If it was to show off his tattoos we certainly saw them and it was a successful initiative. But it cost us a yellow card.
"Imagine if the match had heated up and he got a second yellow. The intention was good, but I don't know if it was a good thing to take off his shirt.
"I hope he doesn't do it again tomorrow," added Blanc on the eve of PSG's Champions League last 16, first-leg tie against Chelsea at the Parc des Princes.
Url copied to clipboard!