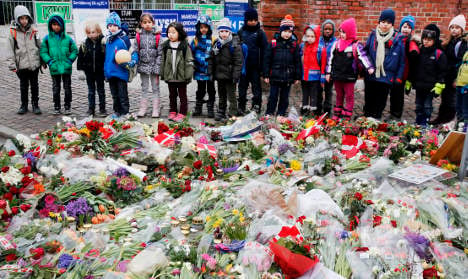 Danish children gather on Tuesday morning at the scene of the first Copenhagen shooting. Photo: TT
The Danish Security and Intelligence Service (PET) released a statement on Tuesday confirming that it had reported in September that the Copenhagen shootings was at "risk of radicalization", while he was serving time for a stabbing, PET said in a statement.
However, it added: "PET had, against the background of the alert from the Prison and Probation Service no reason to believe that the now deceased 22-year-old offender was planning attacks."
The alleged gunman, identified by Swedish and Danish media as Omar El-Hussein, was a Danish-born man of Palestinian origin, who was killed in a shootout with police on Sunday.
Danish politicians have called for an investigation into whether police and the intelligence services could have done more to head off the weekend attacks that left two people dead.
"I assume the government will review this information. Have mistakes been made on the part of the police or PET? That has to be made clear," the main opposition party Venstre's spokesman on justice issues, Karsten Lauritzen, told Berlingske.
Police across Scandinavia are on high alert after the shootings at a cultural centre and a synagogue in Copenhagen that have stoked fears about increasing anti-Semitic attacks.
An area around the site of the first attack was cordoned off on Tuesday after the discovery of a "suspicious" letter but the cordon was subsequently lifted after no explosives were found.
Read The Local's interview with Denmark's Ambassador to Sweden
Swedish artist Lars Vilks, who is the presumed target of the first attack has been sent into hiding since the shootings.
Vilks – who has already faced several death threats since his cartoon portraying the Prophet Mohammed as a dog was published in a Swedish newspaper in 2007 – already lives under constant police protection.
But police spokeswoman Ewa-Gun Westford said that Vilks' home in Höganaes, southern Sweden was "not a safe place. And he needs to be in a safe place".
Around 30,000 people turned out for a rally in Copenhagen on Monday night to commemorate the shooting victims.
Url copied to clipboard!