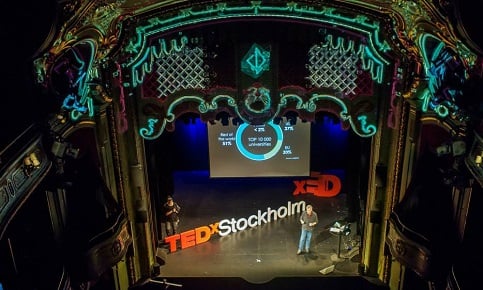 Over 400 TED fans  – many of whom were international students – gathered in old chambers of Södra Teatern, located on the Stockholm island of Södermalm, eager for a day of inspiring "ideas worth spreading" – the TED catch phrase.

TEDx is an offshoot of TED, a popular non-profit organization that brings together speakers from technology, entertainment and design, at conferences held all over the world. The theme for this TEDx event was Differentia,  focusing on the concept of diversity and the potential of creating innovative solutions in society by coming together from very different professional and cultural backgrounds.

The lineup of “Differentia” speakers included entrepreneurs, athletes, professors, and other inspiring visionaries who have discovered a method of harnessing these differences to create a unique solution to a common problem.

Read also: TEDx – 'How I got immigrants and Swedes dining together'

The event kicked off with a lecture by Ana Rosling Rönnlund, a Swedish entrepreneur and visionary. She spoke about her projects Gapminder and Trendalyzer, but particularly her new project Dollar Street – a photography project which documents life in all stages of income across the world.

"The key differences in the world are not due to culture or country or religion, but due to income," she explained, showing how families across the world live.

Math professor Paul Vaderlind then spoke about statistics and the world's need for education. In fact, he said, Sub-Saharan Africa will soon be needing 5 million additional teachers – more than half the population of Sweden.

Paul Vaderlind @Stockholm_Uni asks,"How many gifted students from around the world get the chance for a proper education?" #Differentia2015

The next speech was by Yamina Enedahl, the stubborn young Swedish woman with immigrant parents who broke the world free-diving record.

Yamina, who trained for years for Olympic swimming before giving up for a while, explained her discovery that supportive encouragement is better than the old rules of 'no pain, no gain'.

Working with a coach who was always critical, always looking for the next champion, Yamina could not go on.

"It was like my joy and inner drive was replaced by someone else's agenda," she said.

Read also: TEDx – how travel is broken, and how to fix it

It was only much later, when she learned to respect herself and not push too hard, that she became happy and health again – and ended up breaking a record.

"Mental respect is everything," Yamina explained. "I changed the negative conversation with myself, and when I changed, the world changed around me."

Rather than 'pain is gain', Yamina said that we all must learn that learning is winning, no matter the result.

"It gives us all the opportunity to become better versions of ourselves. Imagine what could happen if world leaders were also more emotionally connected."

Frank Schuil, the CEO of startup company Safello, then spoke about his ideas for the future of currency.

"Bitcoin can do for money what the internet did for information," he said. In a world full of conflict, money is not always reliable. Refugees struggle to retain their money, as banks may not be available and paper money may suddenly use its value.

The solution, Frank said, could be Bitcoin, and a BrainWallet system where a simple passphrase is all that is needed for someone to regain access to their funds in another country. What are your thoughts – could it actually work?

Dahan's mother was a young girl in a war-torn country who began painting bomb shelters in order to make the world a better place, and now Dahan keeps up the work. He is a painter and a street artist, setting up street art festivals, and also spent time volunteering with Project Playground in Africa, giving children a safe place to focus on art instead of being on the streets.

"Enthusiasm can't be taught from a textbook. That's what art can do." @shaidahan #Differentia2015 @TEDxStockholm Want to know more about upcoming TEDx events? Get information at www.TedxStockholm.com, or look for TEDx events in your city, such as TEDxUppsala or TEDxGothenburg.