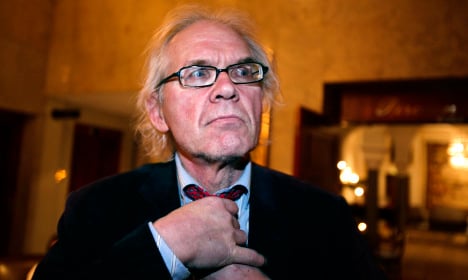 Lars Vilks – who has faced several death threats since his cartoon portraying the Prophet Mohammed as a dog was published in a Swedish newspaper in 2007 – has gone into hiding after Saturday's deadly attacks.

"The attacker had good weapons, he had better weapons than the police… There was an escalation since the Charlie Hebdo attacks and the Danes had not caught on to that," said Vilks.

"They did not step up security on Saturday. It was the same as we had previously… they must consider whether they need to be better armed," Vilks added, referring to the cultural centre in Copenhagen that was the focus of the first of the twin attacks.

It took place as the centre was hosting a forum on Islam and free speech.

Vilks, believed to have been the target of the shooting, emerged unharmed after a gunman fired off dozens of rounds, killing a documentary film maker and injuring three police officers. The shooter later attacked the Copenhagen synagogue where he killed a Jewish man standing guard outside.

Swedish police said on Monday that they had moved the artist from his southern Swedish home to an undisclosed "safe" location.

Meanwhile, police across Scandinavia are on high alert after the shootings caused fears about new attacks.

But Swedish Home Affairs Minister Ygeman told The Local that Sweden did not consider itself to be more at risk since the shootings in Copenhagen or Paris.

"We have had a higher threat level in Sweden since autumn 2010. This hasn't changed."

However he added: "Police have taken the decision to better safeguard some buildings, institutions and persons."

He would not comment on the protection being offered to Vilks or how much this was costing the Swedish tax payer.

Speaking as he prepared to board a plane to Washington to meet with US Secretary of State John Kerry, he noted that his efforts to encourage better cooperation between national security services, which he revealed in an interview with The Local last month were being "warmly received" by other nations, although he would not say which countries had been most receptive.

"Many countries have committed themselves to this and I am just off to speak to John Kerry to discuss the exchange of information between neighbours… This will mainly be the job of security services but also has to do with changes within national institutions."

The alleged shooter in the Copenhagen attacks, identified by Swedish and Danish media as Omar El-Hussein, was a Danish-born man of Palestinian origin, who was killed in a shootout with police on Sunday.

Vilks' comments come as it emerged the supposed gunman was already known to the Danish Security and Intelligence Service (PET) as someone who may have been radicalized while in jail. He is joined by Danish politicians who have called for an investigation into whether police could have done more.

"I assume the government will review this information. Have mistakes been made on the part of the police or PET? That has to be made clear," the main opposition party Venstre's spokesman on justice issues, Karsten Lauritzen, told Danish newspaper Berlingske.