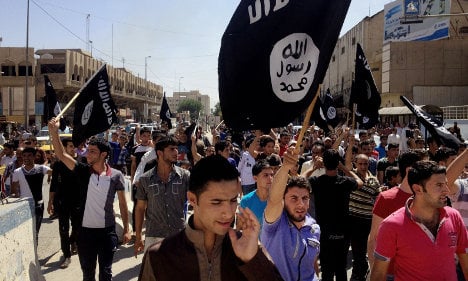 Police said a "large raid" took place in Stockholm as part of a probe into money laundering and undeclared work but declined to comment further.

Sources close to the investigation told Swedish newspaper Dagens Nyheter the suspects had ties to Syria and IS.

The paper said Tuesday's arrests targeted three men and a woman aged between 31 and 50.

Swedish government agencies estimate that up to 10 million Swedish kronor ($1.19 million) are sent to violent extremist groups every year.

"A few million may sound like not a lot of money, but remember that an act of terror rarely costs more than 100,000 kronor to execute," Jonas Clausen Mork at the Swedish Defence Research Agency told Dagens Nyheter.

Is Syria the biggest threat to Sweden since the Second World War?

In January, the Swedish intelligence service (Säpo) said 130 Swedes had joined jihadist groups in Iraq and Syria since 2012.

"We have seen an increasing number of young Swedes travelling to Syria where they go and get training in training camps, they learn to become terrorists, handle explosives, handle weapons," Säpo's head Anders Thornberg told the TT news agency.

Last month Sweden's Social Democrat justice minister Morgan Johansson said that the government was planning to draft a bill that criminalized Swedes who participated in training with or fighting for groups classified as terror organisations by the UN.

The EU coordinator for anti-terrorism, Gilles de Kerchove, estimated at the end of last year that a total of 3,000 Europeans had joined Isis, which has caused global revulsion with its regular videotaped beheadings of hostages and links to bloody violence in Syria and Iraq.