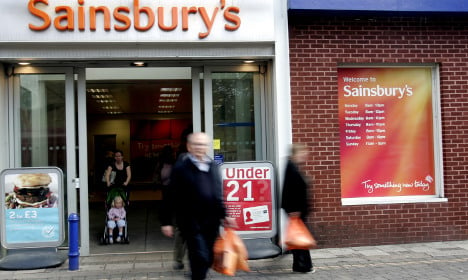 The 19-year-old from Uddevalla in Sweden has worked at skincare chain The Body Shop in London for five months. But when she tried to apply for a points card with the supermarket Sainsbury’s, an error message appeared saying her first name was invalid.

"I just found it amusing and I've now got a card as Linnéa instead," she told The Local.

"Because I already knew what 'Fanny' meant before I moved to England, I have chosen to call myself Linnéa at work. It's pretty much only when I talk to Swedes that I use my first name," she added.

According to Swedish site Svenska Namn, more than 10,000 Swedish women – and one man – are called Fanny, which was also a popular British name several centuries ago. Fanny Price is the heroine of Jane Austen’s novel ‘Mansfield Park’. But in the UK it is also a slang word for the female sexual organ.

Fanny Carlsson quickly took a screen shot of the loyalty card's online application form and tweeted the incident, writing “Love being called Fanny and living in the UK".

“I previously only had friends and family following me on Twitter, so I certainly had no idea it would spread that much and I don't understand how it did. But I find it really funny and many people seem to have had similar problems with their names abroad," she said.

"My parents already knew I had had some problems with my name, so they're mainly just happy they gave me a middle name that works better!"

A spokeswoman from UK loyalty scheme company Nectar, which manages Sainsbury's store cards, said: "Like many companies we block a number of words on the Nectar website. We are sorry for the inconvenience caused to this particular customer and are reviewing this going forward."