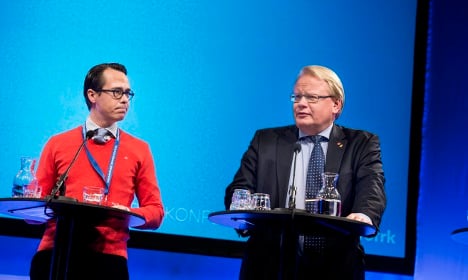 Sweden and Finland have presented proposals for increased cooperation between the countries, including common use of military bases and improved communication.

Finland’s Defence Minister Carl Haglund told news agency TT: “This gives us a concrete ability to work together, first and foremost in peace time, but also in times of crisis should we choose to do so.”

But Sweden’s Defence Minister Peter Hultqvist stressed that the agreement was not a formal alliance.

“By planning for various crisis scenarios we create preparations to use them in a given situation. Whether or not we end up implementing these proposals is a decision that has to be made at government level in that situation and then confirmed by the parliaments in the two countries,” Hultqvist told Swedish newspaper Dagens Nyheter.

Hultqvist added the governments are now going to decide which of the proposals to move forward with.

The announcement comes against a backdrop of increased military activity in the Baltic region.

Relations between Sweden and Russia have been under strain since last summer’s submarine hunt in Stockholm’s archipelago. The Local reported in January that Sweden’s armed forces estimate as many as four submarines were operating in the area at the time.

Earlier this week it was claimed Sweden had given in to Russian military demands over an exercise to be held in the region, claims which Swedish Foreign Minister Margot Wallström denied.

In December the Russian Ambassador was called in to the Swedish Foreign Department to answer questions about a near-miss in the skies over southern Sweden when a Russian military jet almost collided with an SAS passenger plane.