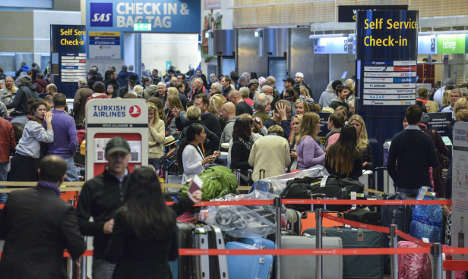 Passengers at Stockholm's Arlanda airport following a 2009 bomb scare. Photo: TT
Under Swedish law, police can ask airlines to provide access to passenger lists in advance of flights taking off, but this information has to be faxed over or collected from airline offices in person, whereas in most major EU nations it can be automatically passed on via secure digital databases set up following a 2004 EU directive.
"I wouldn't dare to say that safety is at risk because we don't have this database but it would be a very, very useful tool to keep Sweden and other countries in the Schengen area safer," Patrik Engström, a police officer working for Swedish Border control, told The Local.
"It is good to know or have a reasonable knowledge about who is going to land and if they are wanted anywhere, so we can check passport numbers against watch lists," he added.
"In theory Sweden has implemented the 2004 EU directive on border control, but we don't have the necessary corresponding database. So when we request information, we usually have to get paper copies because the data is not available electronically."
He said that a quicker provision of passenger information could assist police investigating potential terrorists as well as human traffickers.
"We have held meetings with the Ministry of Justice since the change in government in September and they are aware of this," he explained.
But Sweden's Home Affairs Minister Anders Ygeman blamed Swedish police and the EU for the situation when contacted by The Local.
"We have the legislation to do it [set up the database] but the police have chosen not to make it automatic yet," he said.
The minister said that things were set to change when new EU legislation on passenger name records came into force.
The European Parliament is currently discussing a new law known as the EU Passenger Name Record (PNR) proposal, which would oblige airlines to hand EU countries the data of passengers entering or leaving the EU, in order to help the authorities to fight serious crime and terrorism.
This passenger data would include several different types of information, such as travel dates, travel itinerary, ticket information, contact details, baggage information and payment information.
Supporters argue that it would enable law enforcement authorities to identify previously “unknown” persons (i.e. those previously unsuspected of involvement in serious crime or terrorism, but who authorities may wish to investigate further after more closely monitoring their movements through passenger data). But critics suggest the move would impact on the privacy and data protection rights for passengers.
"The reason for the delay is the PNR directive from the European Union," said Ygeman.
"The problem has been the EU. The police do want to change things but they would rather make all these changes together."
According to Patrik Engström from Swedish Border Control, who previously worked for Europol, the European Union's law enforcement agency, "most airlines" are in favour of making the switch to a digital database as soon as possible.
"The airlines already have the right computer systems in place, because they already follow protocol in the US, the EU and other European countries in providing advanced passenger information," he said.
"Some airlines have reported privacy concerns for passengers, which is a little bit odd because they are aware of the EU regulations and we [Swedish Border Control] are not making requests outside the boundaries of EU or Swedish law."
The Local has contacted several of the major international airlines operating out of Sweden, but only received one response, from the budget airline Ryanair.
The company's Head of Communications Robin Kiely said: “This is a matter for the Swedish authorities.”
Url copied to clipboard!