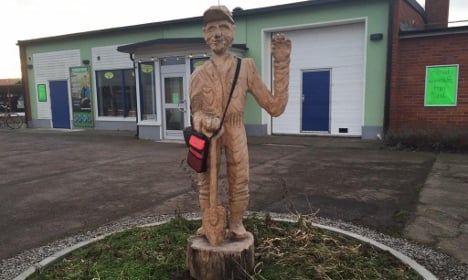 A statue in the town of Färjestaden has been decorated with a handbag. Photo: Emma Rydner

Inspired by a world famous Swedish photograph from 1985 of a protestor hitting out at a Nazi demonstration, a statue of the woman with her handbag in full swing was set to be installed at the main square in southern Swedish town Växjö.

But the council’s culture committee tore up the decision, claiming the statue promoted violence.

Handbags have now mysteriously started to appear on statues across Sweden in what is thought to be a protest against the council’s decision.

Twitter users have also posted pictures of themselves brandishing their handbags in a protest that has reached as far as the Swedish parliament. Social Democrat MP Veronica Palm tweeted a picture of herself inside the parliament building, writing "Here's another lady with a handbag. We are many".

An online petition to convince the culture committee to change its mind has racked up almost 10,000 signatures. Meanwhile, other councils have offered to put up Swedish artist Susanna Arwin’s statue instead.

“If Växjö don’t want it, send it to us,” Malmö councillor Nils Karlsson told Swedish Radio.

And Sigtuna councillor Dan Rosenholm told Uppsala Nya Tidning: “We have phoned the artist and told her we would like the statue. We want to praise people with civil courage and fundamental democratic values.” A replica of Susanna Arwin's statue of the lady with her handbag. Photo: Daniel Ekerot/TT

“I believe that in that spirit it is important to face opposition using words and conversations, not weapons,” she wrote.

Arwin replied: “She [the lady] is more like a symbol of anti-violence and a feeling of ‘enough is enough’.”

The photograph by Hans Runesson was originally published in newspaper Dagens Nyheter and has been voted Swedish picture of the century. It shows Polish-born Danuta Danielsson swinging her handbag at a Nazi demonstrator.