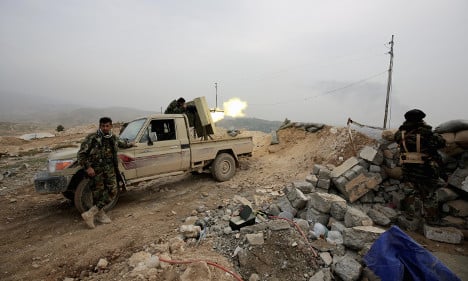 A Kurdish fighter firing towards the positions of Isis fighters near Sinjar in January. Photo:TT

Sweden’s Home Affairs Minister Anders Ygeman hopes the legislation will be passed by parliament and put in place by 2016.

“We can take care of passports so that a person cannot leave Sweden,” he told Swedish broadcaster SVT on Wednesday, adding that he felt it was “terrible” that some Swedish jihadists were currently travelling back-and-forth between the Nordic nation and the middle east.

Last month, Sweden’s Security Service, Säpo, confirmed data suggesting that at least one hundred Swedes have so far fought alongside Islamist extremists in Iraq and Syria.

Its head Anders Thornberg told the Swedish newswire TT: “We have seen an increasing number of young Swedes travelling to Syria where they go and get training in training camps, they learn to become terrorists, handle explosives, handle weapons.”

The move to confiscate passports from known Swedish extremists follows similar strategies in the UK, France and Germany.

British Prime Minister David Cameron announced in September 2014 that he wanted to introduce new powers to allow authorities to seize the passports of British-born extremists. The country has already removed the passports of more than 25 people who were seeking to travel to Syria.

If Cameron’s Conservative party wins the upcoming general election in the UK, further measures are set to target what Britain’s Home Affairs Minister Theresa May has described as people and groups who “stay just within the law but spread poisonous hatred”.

France is also getting tougher on extremists in the wake of the Paris shootings last month. It has issued growing numbers of travel bans on people suspected of having links to terrorism and is calling for tougher prison sentences for those who preach extremism.

Potential jihadists affected a law proposed in Germany would have their ID card confiscated for up to three years and replaced with a new one that does not allow them to travel outside the country.

But prior to Saturday's terror attacks in Copenhagen, Denmark’s parliament took a completely different approach, voting in a new anti-radicalization plan, promising to invest around 80 million kronor on projects designed to help reintegrate extremists into Danish society.

“If someone does go down that road, we must do everything we can to ensure that they come out again, said Justice Minister Mette Frederiksen.

Speaking on Wednesday, Sweden’s Home Affairs Minister told SVT that his country was also working hard to stop muslims from being recruited to terror groups and to improve integration in Sweden, to "prevent people from becoming radicalized and recruited for these type of organisations”.

But he accepted that until the government’s new terror law came into place it would remain “difficult to prevent people going off to war in Syria” and accepted that it would stay hard to prosecute them when they returned.

The news came as Sweden was also in the spotlight for failing to introduce a digital database to help airlines share advance passenger information with police, despite EU regulations dating back to 2004, which call for the automatic transfer of customer information.