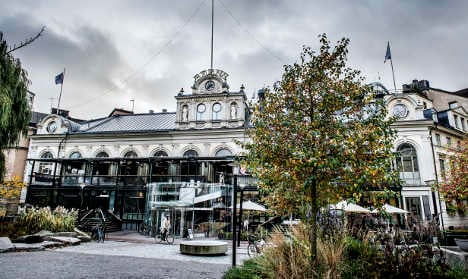 Stockholm's iconic Berns venue is hosting Party like Gatsby this weekend. Photo: TT
The critically acclaimed Constructing Worlds photography exhibition, which was ranked one of the top 10 exhibitions of 2014 by The Guardian when it was in London last year, is opening in the Swedish capital on Friday 20th February. The exhibit will be hosted at the Architecture and Design Centre on Skeppsholmen.
The photography is part art, part documentary, and while it focuses on buildings and architectures, it does so in a remarkably personal way. The museum shares a locale with Moderna Museet.

Leonardo Di Caprio starring in the film version of The Great Gatsby. Photo: Warner Bros/TT
Elsewhere in Stockholm, preparations are underway for Party like Gatsby, an event which has created a huge stir on social media in recent weeks.
"My name is Jay Gatsby," reads the invite.
"People know my name without knowing who I am. I will be in Stockholm for a few weeks in February. I want to arrange a little party in my new residence."
That residence is Berns, Stockholm's historic dance venue which dates back to the 1860s and the partying is set to take place on Friday and Saturday night. Dig out your best frocks and bow ties and prepare for some old school 1920s glamour.
In northern Sweden, Umeå is preparing to welcome folk music enthusiasts from all over Europe for it's annual folk music festival this weekend, where fans are told to expect music "often created in impromptu meetings in the hallways as well as on stage". The event is one of the country's oldest and largest musical gatherings.
Umeå's folk festival last year. Video: YouTube
For music fans in Gothenburg, the city's Visfestival (song festival) gets underway at Oceanen on Tuesday. Singer-songwriters will be performing new material, which gig-goers can also debate in a discussion zone in the 'Cafe Hammock' area of the venue. The festival also promises "simple food from all over the world", "mysterious art", poetry, a live DJ and children's events.
Click on the interactive calendar below for more ideas of things to see and do across the country this week.