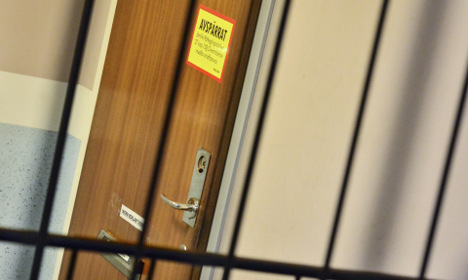 The apartment where a woman reportedly kept her three children locked up. Photo: Johan Nilsson/TT

Police suspected the 59-year-old woman had "restricted her children's freedom… for quite a few years" in the small southern Swedish town of Bromölla, spokeswoman Ewa-Gun Westford told AFP.

She later confirmed to The Local that the women were all between the ages of 20 and 30. Regional newspaper Sydsvenskan reported their ages as 32, 24 and 23.

"We got a report at half past five on Wednesday evening. A worried citizen called the police and claimed that someone had kept three children locked up for many years," she said.

"The woman was arrested on Thursday morning," she added.

Bromölla is best known in Sweden for being the home town of singer and television star Sanna Nielsen, who competed for Sweden in Eurovision 2014. It is a quiet town of fewer than 8000 residents. To neighbours, Thursday's events came as a shock.

Ingrid Nordstedt, 85, told The Local: "I never suspected anything, the neighbours hardly communicate. As a devout Christian, I am very shocked. How could someone do this? If I had known about it, I would have reported it to the police."

"I live in an area with mixed nationalities. We have never had any problems and it has always been very calm here. This took us by complete surprise. It is so sad."

Hanna Persson, 26, added: "I'm in complete disbelief, I never noticed anything weird at all. I always assumed that there was just an elderly woman living there. Whenever I would pass the door it was always quiet. This is mind-blowing."
Leif Dufva from the town council housing association that owns the 65 square metre one bedroom apartment told The Local that rent for the property was always paid on time and he had "no reason" to suspect that people were being held there. He said they had rented the apartment for slightly over two years.

A plan of the apartment where the children were allegedly kept. Photo courtesy of Bromöllahem
According to tabloid Expressen, one of the now adult children managed to briefly leave the apartment and convince a neighbour to call the police, saying that they had been locked up for over a decade.

"The blinds were always pulled down there and we haven't heard any noise from the apartment," a neighbour told the paper.

Expressen also reported that the woman had moved the children around to different locations in an effort to keep them away from their father.

"One of the young women was led out of the apartment, she could barely walk by herself," an eye witness told newspaper Aftonbladet.

Prosecutor Pär Andersson told The Local the woman and the children had been questioned at a police station in the nearby town of Kristianstad.

He was not able to confirm the physical or mental state of the daughters, who he said all spoke Swedish. He confirmed he would decide on Friday morning whether to release the woman or request that the court detains her.

A man claiming to be the children's father has spoken to one Swedish newspaper saying he has been searching for the children for 17 years. His identity has not been made public.