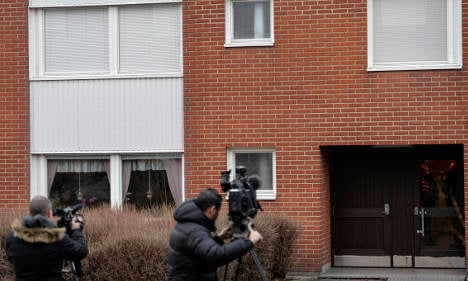 Media crews outside the apartment in Skåne on Friday. Photo: TT

Swedish police arrested the woman, 59, late on Wednesday, amid suspicions she had kept her three children confined for a number of years, police spokeswoman Ewa-Gun Westford told The Local on Thursday.

Reports in the Swedish media suggest that one of the children managed to briefly leave the apartment and convince a neighbour to call the police, saying that they had been locked up for over a decade.

Pär Andersson, the chief prosecutor in the case confirmed to The Local on Friday that the women were aged 23, 24 and 32.

The 59-year-old woman has denied all the accusations against her and at an initial hearing at Kristianstad district court on Friday her lawyer Thomas Ljungdahl claimed that the family had moved around because they were seeking help for "medical problems".

He later described the family to Swedish broadcaster SVT as having "an unusual way of life" but said that there were "no crimes involved" and added that the mother was "very surprised" that the children had allowed the case to go to court, stating that they had been free to leave their home.

The court ruled that the mother should not remain in custody, but called for the younger women to remain under the protection of social services.

The mother remains formally suspected of keeping her children locked up and shielded away from the outside world, between January 1st 2013 and January 18th 2015, according to the prosecutor and could be called to reappear at a later stage in the police investigation. Pär Andersson recommended that officers should consider whether or not the children had been mentally abused.

The apartment where a woman is suspected of locking up her daughters. Photo courtesy of BromöllaHem

It emerged on Thursday that the mother had been renting a 65 square metre one bedroom apartment in southern Swedish town Bromölla where she is accused of keeping the women for slightly over two years.

In court on Friday it was confirmed that she and her daughters had moved a total of 23 times.

Sweden is known for its extensive welfare and social care network. Jonas Nordström, lawyer for the Swedish National Agency for Education, told Aftonbladet: "I have never heard of children falling between the cracks like this. For it to take this many years before it is acted upon is very strange."

Bromölla is best known in Sweden for being the home town of singer and television star Sanna Nielsen, who competed for Sweden in Eurovision 2014. It is a quiet town of fewer than 8000 residents. To neighbours, Thursday's events came as a shock.

Ingrid Nordstedt, 85, told The Local: "I never suspected anything, the neighbours hardly communicate. As a devout Christian, I am very shocked. How could someone do this? If I had known about it, I would have reported it to the police."

"I live in an area with mixed nationalities. We have never had any problems and it has always been very calm here. This took us by complete surprise. It is so sad."

Hanna Persson, 26, added: "I'm in complete disbelief, I never noticed anything weird at all. I always assumed that there was just an elderly woman living there. Whenever I would pass the door it was always quiet. This is mind-blowing."
The local housing association also confirmed to The Local that rent for the property was always paid on time and said that it had "no reason" to suspect that people were being held there against their will.

The woman lived with her children in this apartment in Bromölla. Photo: Johan Nilsson/TT

A man claiming to be the two youngest children's father has spoken to one Swedish newspaper saying he has been searching for them for 17 years. His identity has not been made public.

But a woman said to be the 59-year-old's mother told Aftonbladet her grandchildren had always been able to move freely while they and their mother had been trying to keep hidden from the father after a custody battle.