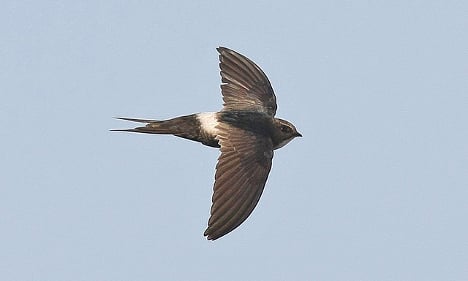 The white-rumped swift is changing its Swedish name. Photo: Nic Hallam/Flickr
Four different bird species which include the word "neger" ("negro") have been renamed using "svart" ("black") instead.
Other feathered creatures known as "swifts" in English will no longer be called "kaffer" in Swedish. This word, which can also be spelt "caffer" and "kaffir" is a racist term that has been used by white South Africans towards black South Africans.
So white-rumped swifts will now be known as "vitgumpseglare" in Swedish.

The dabbling duck formerly known as "Hottentott Teal". Photo: Peet van Schalkyrk/Flickr
"Hottentott", a species of dabbling duck is also being renamed because the word "Hottentot" is a derogatory term for a group of indigenous people called the "Khoikhoi" living in South Africa. The term is thought to refer to their language, which includes clicking sounds.
"Zigenarfågel" which translates as "gypsy bird" will take the name "hoatzin", the English word already used to describe a type of tropical pheasant found in swamps and forests.
"We haven't had an official list of what all the birds in the world are called in Swedish until now, we just had an unofficial list put together about ten years ago," Anders Wirdheim Information Officer at Sweden's Ornothological Society told The Local.
"We kept getting more and more questions from translators of Swedish TV programmes and books wanting to know what exactly different bird names were or meant, so we decided to compile a list and while we were doing that we decided to change the names of any birds that could have stirred up a debate," he added.
The full list of Swedish bird names was completed three weeks ago after several years of research and includes translations for 10,709 different species.
Bird watching is a popular hobby among nature-loving Swedes. Around 17,000 are members of Sweden's Ornothological Society and the group estimates that a total of 30 to 40,000 people across the country participate in the sport on a regular basis.
There has been little debate about the name changes in the Swedish media, although plenty of bird fans have been tweeting photos or drawings of the animals in question.
"I thought it would be a few reactions, but there have not been so many," Erling Jirle a researcher at the University of Lund and bird enthusiast told Swedish newspaper Sydvenskan.