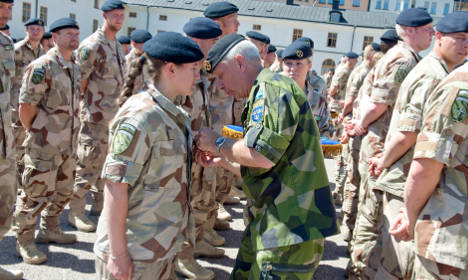 With the number of women applying to join the military on the rise, so called 'Gender Focal Points' (GFPs) will be appointed to help develop and implement gender action plans for their respective regiments.

Captain Anna Björsson, who supports the chief of operations on gender issues, said: “We've been working on this for ten years. It's nothing new, but what we want to do now is try to find concrete ways of working with gender issues.”

A course to educate the GFPs has just been held by the Nordic Centre for Gender in Military Operations.

Course leader Major Ola Nilsson said in a statement: “The course has by and large consisted of workshops and seminars. The goal is that we will have a GFP stationed at every regiment, by 2016 at the latest, who will use 10-20 percent of their work hours to focus on gender issues.”

IN PICTURES: Swedish women in the Armed Forces – from Afghanistan to submarines

While Sweden already has a global reputation for gender equality, Captain Björsson said much work remains to be done.

“Even today, only 10 percent of our staff are women. It's not a question of asking what women as such can bring to the organisation – I think you have to be wary of that – but it is very important to have a gender mix, but also a mix of ages, backgrounds and ethnicities. A homogeneous group never get to develop their arguments, because they just agree with each other all the time,” she said.

The initiative has sparked some debate on social media, with one Twitter user asking “Is this a joke?”

A prominent Swedish psychiatry expert and debater also commented, saying “Who needs Monty Python's Department of Silly Walks when we have the Swedish gender defence.”

Captain Björsson replied: “I buy that there are other things that are also important, but as one of Sweden's largest organisations we have to live up to the gender ideals we promote. It is not our top priority above everything else and gender issues are not the most important all of the time, but it is still very important that we act as a role model.”

“We have a direct order from the government to integrate equality into our work. And as the organisation whose job it is to defend our nation in the event of an attack, women's rights concern us very much. The job of the military as an organisation is to defend our democratic values, so it is important that we live up to that.”

“We need not only to look externally, but also make sure our own organisation reflects the thing we want to achieve,” she added.