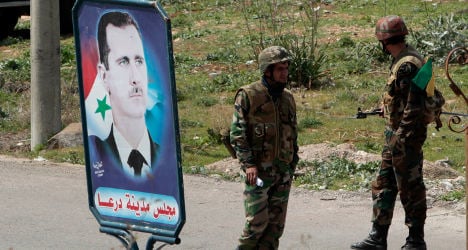 “I feel OK. I’m exhausted both mentally and physically, but I’m OK,” the 30-year-old reporter from Uppsala, north of Stockholm, said shortly after his release on Saturday evening.

Medin was arrested together with a Kurdish colleague by government forces in Qamishli, in northeastern Syria on the border with Turkey, on February 15th. The motive behind the arrests remain unclear, but Medin said he believes it has to do with the fact that he had not received permission from Syrian authorities to be there.

“We were walking along a street when we were stopped. They had set up a checkpoint and when we walked passed it we were detained,” he told Swedish tabloid Expressen.

“Something must have happened there to make them decide to arrest us. I’ve been told several times that I’m the first foreign journalist that they have arrested. It’s unusual for them to act like this.”

During his time in detention, Medin said he had first been kept in a tiny underground isolation cell with no light. “It was covered in dirt and blood and it was cold. I was freezing and caught a cold.”

Medin said he was repeatedly questioned.

“What I was doing there and my relationship with Turkey, Kurds and Israel,” he said.

Medin and his Kurdish colleague were freed after representatives from the region’s most influential Kurdish party, the Democratic Union Party (PYD), negotiated their release.

The Kurdish journalist works for the Free Union Media which is linked to PYD.

According to Swedish daily Dagens Nyheter, Kurdish militants captured some 20 Syrian soldiers, including a high-ranking Syrian military official, to negotiate an exchange.