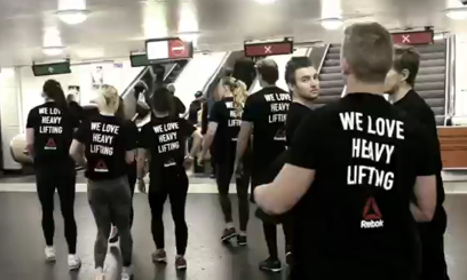 A shot from the video Reebok made about the athletes. Photo: TT
Dozens of escalators have remained stationary since an elderly woman seriously injured her leg on Saturday February 14th at Östermalmstorg underground station.
She is understood to have fallen through a faulty step caused by a manufacturing defect.
For the past few days SL – the company that runs Stockholm's public transport system – has called in extra staff to monitor commuters as they walk up the frozen escalators, with eleven stations offering water to passengers once they make it to the top.
As the network continues an internal investigation into the problem alongside MTR, the company that manufactured the escalators, PR-savvy sports brand Reebok has attempted to raise its profile by hiring athletes to carry weary travellers up the stairs at Östermalmstorg, which has some of the longest escalators in Stockholm.
"We at Reebok like to lift heavy things so when we saw that the escalators were standing still we decided that we could make a difference," press officer Charlotte Wik told Swedish newspaper Dagens Media on Monday.
Reebok roped in keen athletes who attend the gym Fit4life Crossfit, by persuading them to lift bags as well as people instead of doing their usual morning workouts. The company said that the stunt fitted in with its current slogan "Be More Human".
Despite some criticism that the move had further held up some travellers, the firm insisted that those it had helped had been "grateful and happy".

Water handed out at #Zinkensdamm. Dozens of escalators still off in #Stockholm as precaution after woman hurt on Sat. pic.twitter.com/TgqBqW5zqp

The stations still affected by the temporary shutdown are: Hötorget, Rådmansgatan, Odenplan, St Eriksplan, Östermalmstorg, T-Centralen, Slussen, Mariatorget, Zinkensdamm, Hornstull and Skanstull. All of the affected stations offer wheelchair ramps and fully functioning lifts.
The SL press office has been unable to update The Local on when the escalators are likely to be up and running again.