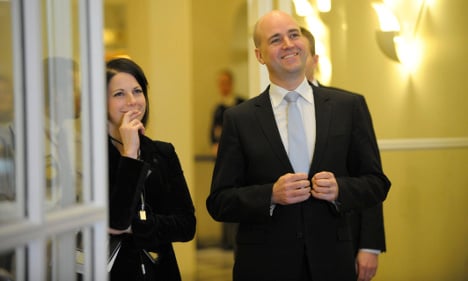 Roberta Alenius (left) pictured with Fredrik Reinfeldt in 2009. Photo: TT
The former Moderate Party leader who was at the helm of Sweden's previous centre-right coalition government between September 2006 and September 2014 sent a text message to the TT news agency on Monday, describing his new partner as an "amazing woman".
"Roberta and I have been colleagues for many years. It has gradually become a deeper friendship. I do not know yet where this will lead us," he said, adding that the new couple were currently away skiing "with a large group of friends". Fredrik Reinfeldt and his former press officer pictured in 2010. Photo: TT
News of the new coupling was first broken by Sweden's Expressen newspaper early on Monday.
Eleven years his junior, Roberta Alenius, 36, is deputy director of Reinfeldt's newly established consulting company. Born in Stockholm, she has an Italian father and previously worked as a tax lawyer before becoming a press officer for the former prime minister.
Fredrik Reinfeldt and his wife Filippa Reinfeldt divorced after 21 years in 2013. She also spent many years working for the Moderate party and recently took on a new business role at healthcare giant Aleris. The pair have three children.
IN PICTURES: Fredrik Reinfeldt through the years
The announcement of the ex-PM's new relationship comes just days after another former Moderate party cabinet member, Anders Borg, announced that he was divorcing his wife after getting together with a former star of cheesy 1990s band Army of Lovers, Dominika Peczynski.
Despite being ousted as prime minister last year, Fredrik Reinfeldt remains respected in Sweden and recently came ninth in a poll looking at the global figures Swedes most admire.
He has made few major public appearances since his election defeat although he did attend a UN climate summit in New York last September and speak and at the Confederation of British Industry’s (CBI) annual conference in London, when he warned that Europe needs to be better prepared for future financial crises.