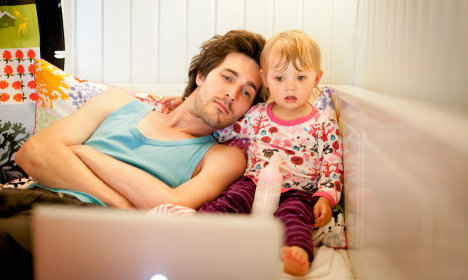 A Swedish father and daughter look at a computer. Photo: Kristin Lidell/Image Bank Sweden
After measuring connectivity (how accessible and affordable broadband is), internet skills, how frequently Europeans use the internet for key activities such as online shopping and accessing news and how well developed digital technologies and digital public services were in each member state, Sweden was given a score of 0.66 (with 1.0 being the maximum score possible), in the EU's report on digital services in Europe.
Denmark was the only country to score higher, with fellow Nordic nation Finland also making the top five. Romania came in last, with a score of 0.31.
Sweden was especially praised for making fixed broadband services available for 99 percent of homes.
"This is remarkable given Sweden's geographical configuration," noted the report's authors in a nod to the country's sparsely populated rural north.
The study suggested that Swedes were more actively engaged in online activities than those from any other European nation. 84 percent of people aged between 16 and 74 use the internet as a news source, compared to a European average of 67 percent, for example.
Sweden was also found to have the highest number of ICT (information and communications technology) specialists in the workforce in Europe, almost twice the EU average, which the report said "allows Sweden to further increase the competitiveness of the Swedish economy".
But despite Sweden's reputation as a tech-savvy location that is also a popular destination for European start-ups, the report found that just 7.7 percent of Sweden's small and medium sized businesses (SMEs) sell online across borders, half the European average of 15 percent.
The report revealed that across Europe, 75 percent of people now use the internet on a regular basis in 2014, up from 72 percent the previous year.
The European Commission is currently preparing its Digital Single Market strategy, which will be presented in May.
"Data shows that the picture of how digital countries are varies across the EU and that borders remain an obstacle to a fully-fledged Digital Single Market," it said in a media release on Tuesday.
"There are plenty of digital opportunities waiting to be unlocked to benefit European citizens and companies. From shopping or studying online, to paying bills or using public services over the internet – the web is the answer, if the right conditions are in place," the statement added.
Sweden has scored highly in a number of similar rankings looking at internet usage in recent years.
In November 2014 a report by the International Telecommunication Union ranked Sweden in third place, behind South Korea and Denmark, in terms of access to information and communication technology.
Earlier that year, The Local reported that Sweden topped the Nordic charts in terms of smartphone use, with 75 percent of people aged 16 or over owning one of the devices by July 2014.