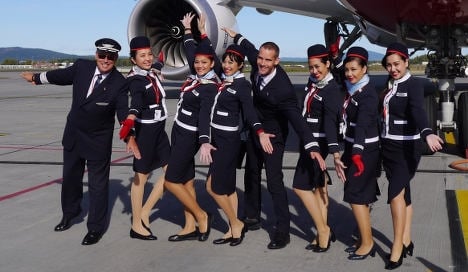 The Swedish union on Tuesday said its staff would strike on March 4th if Norwegian pilots stayed away from work this Sunday.

Norwegian pilots have threatened strike action if the airline fails to end more than three months of fruitless negotiations over pay and conditions. If the walkout goes ahead in Norway, it will be the first strike by pilots working at the budget airline.

Halvor Vatnar, leader of the Norwegian Pilot Union, said that he did not believe that the company’s chief executive Bjørn Kjos had any intention of meeting his members half way.

“Our experience over the past four years is that Kjos want to get rid of us, and that he is running a union-busting strategy,” he said. “He does not want permanently employed pilots, but hired pilots on obscene terms.”

The company, he argued, was determined to force through a harsh reduction in the wages and employment rights enjoyed by its Scandinavian pilots, arguing that it was the only way for the airline to compete internationally.

“The overarching point is that the cost of pilots in Norway, Sweden and Denmark is too high,” Vatnar said. “It is required that our terms dramatically worsen if we intend to continue on the adventure that has been Norwegian.”

According to Martin Lindgren, President of the SPF (a Norwegian pilot's union), the strike action could end up involving as many as 700 pilots in Sweden, Norway and Denmark.

“Scandinavian air traffic will be seriously affected,” he was quoted as saying by Swedish broadcaster SVT. “There will be major disruptions to and from Scandinavia.”

Amongst other changes, pilots are being asked to accept a salary freeze and longer and less reliable hours, with the company threatening to lay off as many as 200 pilots if its demands are not met.

Norwegian is increasingly hiring crews from Thailand and Eastern Europe, who are less expensive.

Lasse Sandakerveien-Nielsen, a press officer for Norwegian, rejected the allegation that the company no longer wanted full-time pilots.

“On the contrary, Norwegian wants to retain its experienced and competent pilots in Scandinavia,” he said.

He pointed to the 1.6 billion kronor loss the company recently posted for 2014, saying it showed that the pilots’ present working conditions were not sustainable.

“In light of this, there is no doubt that we must adapt to survive in the future and have an airline based in Norway,” he said.