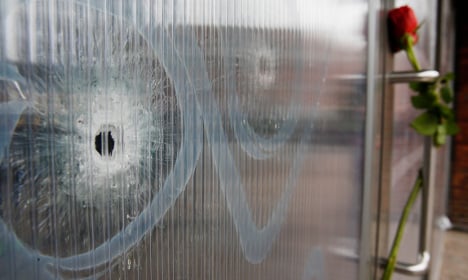 Bullet holes in the window of a cultural centre after a deadly attack in Copenhagen. Photo: AP Photo/Michael Probst

They claim two Danish police officers were having coffee with their backs turned towards the door at the building entrance when the gunman started shooting.

“Everything was very random and there was nothing to indicate that they viewed the event as high-risk,” one witness told Politiken.

The paper also reported that one witness said that that controversial Swedish artist Lars Vilks, who is believed to have been the target of the attack, was spotted standing outside the cultural centre alone and unguarded despite the fact that he has lived under police protection since 2007.

Neither police nor Danish security service PET wished to comment on the claims, reports Politiken.

Helle Merete Brix, founder of the Lars Vilks Committee, which had organised the debate meeting, sat inside the room and did not witness the events at the entrance. But she told Politiken: “The only thing I can say is that the Swedish bodyguard and the Danish officer inside the room reacted in a split second.”

TIMELINE: How the Copenhagen attacks unfolded

Swedish police have previously been hailed for stalling an attack that could have turned into a mass murder.

A source speaking to Swedish newspaper Sydsvenskan said one of Vilks' police protection officers shot at the gunman who carried out the attack that killed a 55-year-old film maker, which took place ahead of a second shooting at a synagogue.

“I know that one of them emptied his entire gun,” he told the paper, adding that this had “interrupted the attack” and suggesting that this may have prevented further casualties. Neither Danish nor Swedish police have confirmed the claims.

Two Swedish police officers were present at the venue to guard Vilks, who has had round-the-clock security ever since his drawing of the Prophet Muhammad was published in a local Swedish paper in 2007 with an editorial on the importance of freedom of expression.

The gunman, suspected to be 22-year-old Omar Abdel Hamid El-Hussein, was shot to death by police following the second attack.