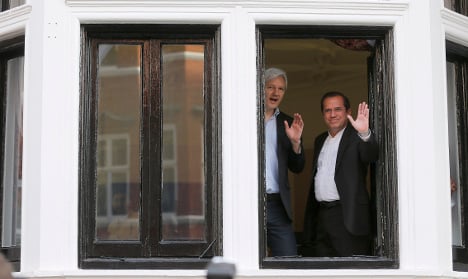 Julian Assange with Ecuador's ambassador in London in 2013. Photo: TT
The move is the latest development in Julian Assange's long battle to fight extradition to Stockholm where he faces arrest following sex allegations made by two different Swedish women in 2010, claims which he denies.
Assange's defence team filed its submission to Sweden's Supreme Court at 4pm, one of his lawyers, Per Samuelson has revealed to The Local.
He said the Wikileaks founder's legal team had argued that the "severe limitations" on Assange's freedoms caused by his inability to leave the Ecuadorian embassy without fear of arrest were "unreasonable" and "disproportionate" to the case.
The team's submission also questioned the chief prosecutors in the case who Samuelson believes have been "passive for the last four years". In addition, the lawyers asked to be given access to some 100 text messages sent between the women who claim Assange assaulted them and to some of their friends.
"We have not been given permission to have copies of these messages, so we cannot file them as evidence," he told The Local.
"We want Sweden's Supreme Court to send the case to the European Court of Justice in Luxembourg to get its view on whether the prosecutors' decision to refuse access to those messages is legal. We think it is illegal and against European law," he said.
Samuelson said there was a "zero chance" that the Supreme Court would react to the new submission by the end of Wednesday, adding that it was "hard to tell" when prosecutors would reach a decision.
TIMELINE: Julian Assange sex allegations
Assange, 43, has long argued that extradition to Sweden could lead to him being transferred to the United States to face trial over Wikileaks' publication of classified US military and diplomatic documents.
He has not left the Ecuadorian embassy in London for two years and according to Samuelson "he has not taken one step outdoors. He has not even leaned out of the window".
The Wikileaks founder's attempts to avoid travelling to Sweden for questioning have already been thrown out by several appeal courts.
He has called on Swedish prosecutors to travel to London to question him or, alternatively, to do so by video link and the British Foreign Office said it welcomed this possibility and would help to facilitate this, but prosecutors in Stockholm argued that it was not normal legal practice.
Earlier this month the UK's Deputy Prime Minister Nick Clegg said that Julian Assange's residence at the Ecuadorian embassy was 'frustrating' for both British and Swedish officials after figures emerged that the Wikileaks founder's security has so far cost British taxpayers around 125 million kronor ($15 million).
Despite his case now being considered by the highest court in Sweden, Per Samuelson has previously told The Local that even if it gets thrown out, this may not be the end of legal proceedings.
"If an appeal is not granted then this case is over. But we are actually entitled to apply once again to the district court in Stockholm, so the case could end up going through the Swedish courts all over again," the lawyer said.
"This could go on indefinitely, there is no time limit. But in the end I am convinced that [Assange] will prevail and become a free man who is also declared innocent in Sweden," he added.