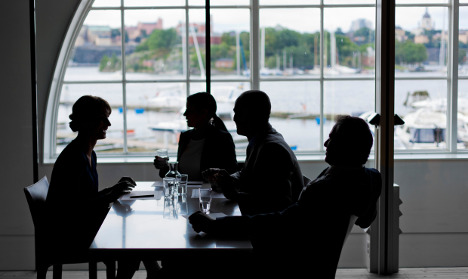 A business meeting in Sweden. Photo: Henry Trygg/Image Bank Sweden
Swedish broadcaster SVT has looked into the ethnic make-up of the boards of Volvo, Ericcsson, Skanska, Hennes & Mauritz, Electrolux, TeliaSonera, SCA, Nordea, Sandvik and ICA and accused some of the best known household brands in the country of shying away from promoting foreign-born workers into the most senior positions.
The television network discovered that out of a total of ninety staff on the boards of Sweden's most elite companies, only eleven came from outside Europe. Nine of those people were found to have American backgrounds and two were Australian.
The broadcaster noted that what it described as a "lack of people of foreign origin" came despite the fact that several of the firms had a strong presence in emerging markets in Asia and South America.
Only forestry firm SCA was praised for deviating from the "white western norm" by appointing American-Cuban Barbara Milian Thoralfsson.
Hennes & Mauritz was among the companies to respond to the criticism. It released a statement saying: "The people who today sit in senior management positions and on the board are appointed for their knowledge, expertise and many years of experience working at H&M both in Sweden and abroad. Overall, this means that together with H&M's country managers, they can develop H&M as a fast growing fashion company."
Swedes took to social media to discuss the issue on Wednesday using the hashtag 'vitabolag' which means 'white company' in Swedish, while business commentators waded into the debate on radio and television programmes and in newspapers on Wednesday.
Carina Lundberg Markow, from Folksam, one of the largest insurance companies in Sweden, which invests in major businesses and has long lobbied for improved diversity in the workplace said that firms were not "maximising" their teams and argued that Swedish boards should operate more like football clubs.
"What if we reacted like this when it came to football players in the national team, if we only went for "Swedish" blue-eyed athletic men. Then we would of course have neither Henke or Zlaran in the team," she told SVT.
She said that businesses needed to recruit the "most competent" senior staff, while also realising that these people might not always emerge from "white middle-aged men born in Sweden", also noting that the same Swedes often sat on several different company boards.
"It's a bit strange that they're an expert on everything from trucks to telephone exchanges for tampons," she said.
But other commentators noted that across Sweden, 23 percent of board members have foreign backgrounds in a nation where 21 percent of the population was born abroad. One Twitter user joked that this did not sound like the "major lack of diversity" reported by SVT.

Adam Cwejman, a spokesperson for the liberal Think Tank Timbro offered a completely different perspective, telling The Local he believed the entire debate had been framed in a language that could serve to further encourage racism.
"The term ethnic diversity is en vogue in Sweden right now and it is being pushed around a lot by anti-racists and democrats but there are some hidden problems when talking about this issue," he said.
"They think they are correcting some implicit discrimination by calling for more foreign workers but at the same time this is basically suggesting that people from outside of Sweden have some kind of intrinsic value just by being non-Swedes. In a way this reinforces the image of non-Swedes being somewhat different."
He argued that companies should instead focus more on recruiting and developing staff with more diverse "skills and experiences".
"An ethnic background may not say anything about a person. What we really need is more colour blindness," he said.
"Also, people will always give positions to their friends and people who they know. Nepotism is a global trait not a Swedish problem."