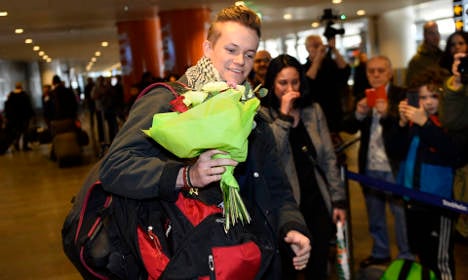 Joakim Medin at Stockholm's Arlanda airport on Wednesday. Photo: TT
The reporter, 30, who is from Uppsala just north of Stockholm told Swedish TT news agency he planned to continue reporting on the plight of Kurds living in Syria, despite his tough experience.
"Stepping back on to Swedish soil was difficult to think about in the cell. I didn't know when that would happen again," he said.
Medin was arrested together with a Kurdish colleague by government forces in Qamishli, in northeastern Syria on the border with Turkey, on February 15th. The motive behind the arrests remain unclear, but Medin said he believes it has to do with the fact that he had not received permission from Syrian authorities to be there.
"We were on a street that I have been on many times but that had previously been calm," he told TT, describing himself as an unlucky "pawn" in a power game.
"It was clear that the Syrian regime's intention was to capture me to test the Kurds' strength and to send a signal that this location is somewhere no journalists should come to report from," he said. Joakim Medin speaking to reporters on Wednesday. Photo: TT
The journalist added that during his week in captivity, he was aware of other detainees being tortured after hearing them "howling and screaming" and said that he was kept in a freezing cold cell covered in dirt and blood.
He added that because he was not employed by a major media company, he was concerned that his arrest might not have been reported and said he worried that he may not get help with his release.
"As a freelancer, no one notices if you do not come to work one day…It felt scary," he explained.
Medin and his Kurdish colleague were freed after representatives from the region’s most influential Kurdish party, the Democratic Union Party (PYD), negotiated their release.
The Kurdish journalist he was with works for the Free Union Media which is linked to PYD.
According to Swedish daily Dagens Nyheter, Kurdish militants captured some 20 Syrian soldiers, including a high-ranking Syrian military official, to negotiate an exchange.
Speaking to Sweden's Expressen newspaper right after his release, Medin said he had been "exhausted both mentally and physically" by his ordeal.