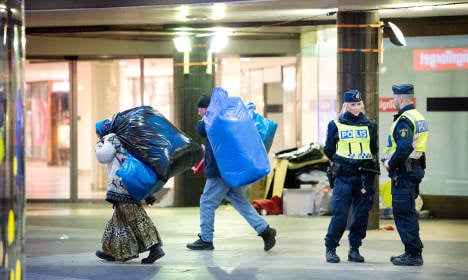 Lars Byström, spokesman for the police in the Stockholm region confirmed to the newspaper Metro that more than 20 people had been evicted on Wednesday.

Fifty Roma beggars were turned away from Stockholm's public square Sergels Torg earlier this month. According to one rough sleeper speaking to newspaper Dagens Nyheter at the time, they had been told that the area had become “too dirty”.

Christian Agdur, head of Stockholm City police, told the Metro newspaper that the sites were a violation of Sweden's Public Order Act.

“We [evict them] because it is our job. People are settling down in a location and you're not allowed to do that. We then tell them to leave. We do this in co-operation with social services which will offer alternative residence, transport and whatever might be needed,” he said.

Maria Emanuelsson, a lawyer for Swedish Police, told newspaper Dagens Nyheter that the eviction decision had been made by the police. She said: “The local authority's own possibilities to act are small. They have to seek permission from the Swedish Enforcement Authority (Kronofogden) and it's a significantly more tedious and complicated process,” she said.

The group leader of the Moderate opposition party in Stockholm, Anna König Jerlmyr has recently urged the government to make it easier for local councils to turn away beggars.

“We get a lot of emails from Stockholmers who say that the limit has been reached. Stockholm has changed in a way that is problematic. It is time to act,” she told Dagens Nyheter on Tuesday.

Local authorities currently have to apply to the Swedish Enforcement Authority for permission to evict rough sleepers. But Jerlmyr wants the councils to be able to act unilaterally.

“According to today's legislation it is enough for [the beggars] to move a few metres, and after that the land owner has to make a new application to the Enforcement Authority,” she said.

“The situation is completely untenable. We have shanty towns in Stockholm in the year 2015.”

But Green Party councillor Ewa Larsson of the ruling local authority centre-left coalition replied: “I think it is good that it is the police who make sure city bylaws are being followed. To me it is not the speed that matters, but that we should be able to offer alternatives when we evict someone. We should work in a structured way, with voluntary organizations and churches that can inform people about laws and rules.”