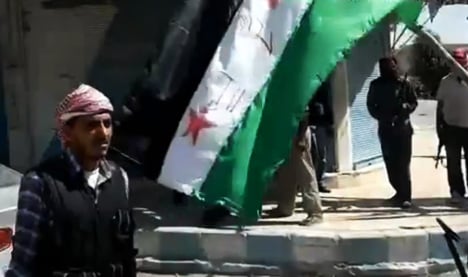 Free Syrian Army fighters in a separate incident in Raqqa in 2012. Photo: TT
Mouhannad Droubi was taken to court after a video of him brutally assaulting a representative of President Assad's Syrian regime was posted online.
The court heard that the assault had taken place in the summer of 2012, when the man kept his victim prisoner, tied him up and beat him.
The attacker had been fighting alongside opposition rebels as part of the Free Syrian Army during the Syrian conflict at the time.
He was convicted of aggravated assault under international law and handed a five year jail sentence in Stockholm on Thursday.
According to Hanna Lemoine, prosecutor at the International Public Prosecution Office in Stockholm, it is probably the first time anyone has been prosecuted in Sweden for acts committed in Syria since the war broke out there four years ago.

When the case was first revealed in the Swedish media earlier this month, prosecutors explained that the man was facing charges in Sweden because he had applied for and received permanent residency in Sweden in September 2013, after the alleged crimes were committed.

Droubi was convicted on Thursday of violating an article of the Geneva Conventions that prohibits "cruel treatment and torture" and of aggravated assault.

He told the court he was "99 percent sure he would have been killed if he hadn't participated in the video recording," according to a copy of the verdict.

The court said it would not order the man's deportation because of the situation in Syria but said that he was likely to lose his Swedish residence permit and refugee protection status pending an investigation.

The man said he risked being killed if forced to return to his home country, where the conflict first erupted in March 2011 as a popular uprising against President Bashar al-Assad.

His lawyer, Magnus Strömberg, told AFP he planned to appeal.

Droubi arrived in Sweden in the month that Stockholm announced it would grant automatic residency to all Syrians fleeing the conflict, except those found guilty of war crimes.

Only two other people have been convicted of war crimes in Sweden. The first was Jackie Arklöv, a Croatian militant who in 2006 was sentenced to eight years in prison after torturing prisoners of war and civilians. He was already serving a life sentence for murder when the verdict was announced.

In 2011 a 44-year-old from Bosnia was sentenced to five years in prison for violent crimes committed abroad.