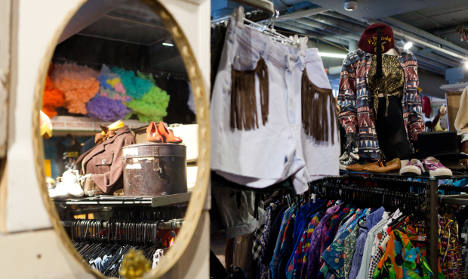 Vintage and charity stores are all the rage in Sweden. Photo: Tuukka Ervasti/Image Bank Sweden
Second hand stores in Sweden aren't just places where the underprivileged shop, they're also a mecca for hipsters, cash-strapped students and frugal bargain hunters.
In major towns and cities, large, well-organized stores run by charities including the Red Cross and the Salvation Army stock everything from shoes and clothing to Scandinavian furniture, books and electrical kitchenware.
Sweden's government has suggested that while other vintage stores should pay VAT like any other high street shop, charity shops should be exempt from the fee. Other not-for-profit organizations in Sweden are already offered tax breaks.
The European Commission – the part of the EU that dreams up policies to be considered by MEPs and Ministers – was previously against the idea and threatened an "infringement procedure against Sweden for the general VAT exemption that Sweden allows to the non-profit sector".
But on Thursday, Vanessa Mock, the Commission's spokesperson for taxation and customs, told The Local that this procedure had now been closed, following "intense discussions between the Commission and Sweden to find a consensual solution to this long-running case".
In a separate statement, the Commission said it had concluded that the VAT exemption did not have any cross-border distortive effects on the Single Market and that it had got sufficient reassurances from the Swedish government that the move would not have a negative impact on other Member States’ contributions to the EU budget.
However it urged Sweden and other EU countries that its decision "should not be read as a new lenient policy against violations of EU VAT rules" that all member states have previously agreed on. A vintage store in Södermalm, Stockholm. Photo: Tuukka Ervasti/Image Bank Sweden
"It is positive that following discussions with us they have decided to drop the case. It gives us a more secure foundation in our efforts to resolve the situation of non-profit organizations that are now forced to pay VAT," Sweden's Social Democrat Finance Minister Magdalena Andersson said in a press release.
Caroline Andermatt, chairperson of the not-for-profit firm Second hand said she felt "relief and joy" following the EU's decision.
"Now there is no longer any obstacle to the Finance Minister and the government to immediately do what is needed to stop a new tax decision that threatens our non-profit activities and society's most vulnerable," she said in a statement.
But it remains unclear if or when second hand charity stores can stop paying VAT in Sweden.
Sweden's tax agency told the TT newswire on Thursday that it maintained its current position, which is that not-for-profit second hand stores should pay VAT on their sales in accordance with Swedish law.
In 2013, Sweden's Supreme Court ruled that most second hand charity stores should keep paying the tax because they were in direct competition with commercial vintage and antique stores, which were legally bound to pay VAT.
Only stores open for fewer than 24 hours week that are largely staffed by voluntary workers are exempt.
A spokesperson for the Ministry of Finance told the TT that the Ministry of Finance was currently carrying out "intensive efforts"  to find a solution to the issue.