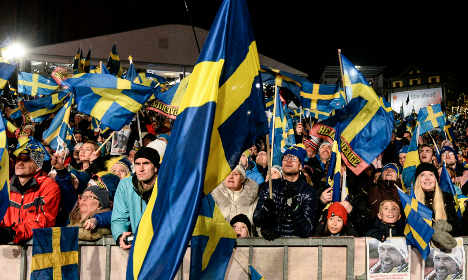 “The phenomenon is bigger than we think, there are large hidden numbers. Before the games started I had hoped that we would not have to see this kind of thing happening, but we do and we hope we will be able to make them face the law,” Stefan Dangardt, spokesman for the police in the Dalarna region where the championships are being held, told broadcaster TV4.

“We have received information from several sources which indicate that this [sex trade] is going on and is in fact a slightly bigger problem during the World Cup than what it normally is,” he added.

200,000 tickets have been sold for the FIS Nordic World Ski Championships in Falun in central Sweden, which is currently under way. Fans from all over the world have watched Swedish skiers Charlotte Kalla and Johan Olsson take home gold medals in some of their races. And the US celebrated on Tuesday when two of its own stars, Caitlin Gregg and Jessie Diggins, skied to claim historic silver and bronze medals in the ladies' 10km freestyle.

But the championships also have a dark side. TV4 reports that they have investigated several websites where women advertise sex during the Ski World Cup.

“Most of the first encounters happen online and it makes it very difficult for us to track them down,” said Dangardt and added that police have been working with hotels in Falun to combat the problem.

It is not illegal to sell sexual services in Sweden, but in 1999 it became the first country in the world to criminalize buying sex, in a move designed to punish clients rather than those working in the industry. The law helped  halve the number of street walkers in Sweden's cities by 2010, but the country is still facing a growing problem of sex sold over the internet, with increasing numbers of meetings in hotels and hired apartments now also arranged using mobile apps.

Earlier in February, The Local reported that following a directive issued by the Swedish government in 2014, Länsstyrelsen Stockholm is working with the police and industry leaders to help combat prostitution in the hotel, restaurant and taxi industries in Sweden's capital.

The Ski World Cup takes place over twelve days and includes cross-country skiing, ski jumping, combined and team events. Sweden had high hopes to claim another gold medal in the ladies' 4x5km relay race on Thursday afternoon, but in the end had to settle for a silver behind Norway.