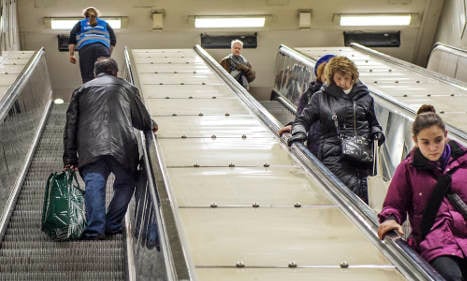 Commuters using some of the stationary escalators in Stockholm. Photo: TT
SL, the company which runs the Swedish capital's transport network told media in Stockholm on Friday that it remained unclear when services at 11 stations affected by the switch-off would return to normal.
"We only know that we will not start the escalators on Monday," Suss Forssman Thullberg, a press officer for SL, told newspaper Dagens Nyheter.
39 escalators have remained stationary since an elderly woman seriously injured her leg on Valentine's Day at Östermalmstorg underground station.
She is understood to have fallen through a faulty step caused by a manufacturing defect.
SL has since called in extra staff each day to monitor commuters and tourists as they walk up the frozen escalators, with the affected stations offering water to passengers once they make it to the top.
The network is continuing an internal investigation into the problem alongside MTR, the company that manufactured the escalators.
"We do not know exactly how long they will be standing still. We are now working to strengthen and increase safety on the escalators. We will do it as quickly as possible without compromising safety. As soon as we have something more to say, we will," Forssman Thullberg said.
The first escalator set to be strengthened is at Östermalmstorg, where passengers are currently having to climb up 180 stairs or queue for a tiny lift.
Last week PR-savvy sports brand Reebok attempted to raise its profile by hiring athletes to carry weary travellers up the stairs at the subway stop.
The stations still affected by the temporary shutdown are: Hötorget, Rådmansgatan, Odenplan, St Eriksplan, Östermalmstorg, T-Centralen, Slussen, Mariatorget, Zinkensdamm, Hornstull and Skanstull.
All of the affected stations offer wheelchair ramps and fully functioning lifts.