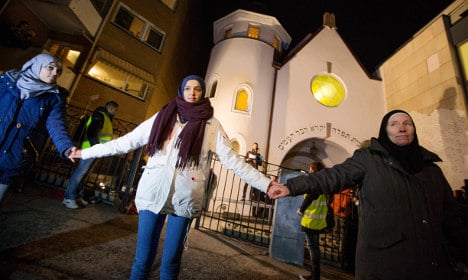 The demonstration follows a similar peace vigil in Oslo last weekend, when Norwegian Muslims formed a human ring around the main synagogue in an inter-faith show of support.

Among the organizers are groups 'Young Muslims Against Anti-Semitism and Xenophobia' and 'Young Roma'.

Emir Selimi, chairman of Young Roma, told Swedish Radio: “The values of this project is about are love, understanding and trust. In today's Sweden and Europe there's a lot of hatred, instead of love. Instead of understanding there is misunderstanding, and instead of creating understanding you create misunderstandings. The message we want to get across is that you can support one another, even if you belong to a minority group.”

When Jews gather for their Friday service to honour the Sabbath, people will meet outside the synagogue, take each other's hands and form a human shield around the building.

800 people have so far replied to a Facebook invitation, saying they will attend.

The Jewish Association's general secretary Ingrid Lomfors told Sveriges Radio of her joy when she first heard of the idea.

“What governments and police do is of course very important. But initiatives coming from the outside, by representatives of civil society, can move mountains. This means so much, and it gives me hope,” she said.

“There's a human solidarity that goes beyond our identities as Jews, Muslims or Roma. We are all people. And we are all as keen to protect the idea of human equality,” she added.

Swedish Jews have previously voiced concern of a fresh wave on anti-Semitism after a synagogue was targeted in a pair of attacks in Copenhagen on 14th February, which killed two, with President of the Jewish Council Lena Posner-Köröri telling The Local it's "the worst time for Jews since the Holocaust".

It was reported earlier this month that police guarding synagogues in Sweden will be equipped with machine guns and bullet proof vests.