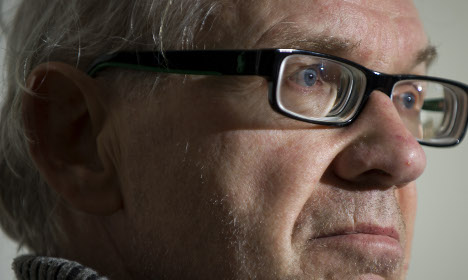 Karlstad University in central Sweden announced on Friday that it was cancelling the lecture because it could not guarantee the safety of the audience in the wake of the recent shootings in Denmark and France.

"We have done a security check and decided that it is too high a risk to have this arrangement in our building," Jan Ganbreng, head of security for the university told The Local.
"It has been cancelled, not postponed. But perhaps another building will offer to hold it," he added.
Lars Vilks was scheduled to talk to around 100 members of a student foreign policy association on March 17th. Karlstad University is attended by around 15, 000 students.
The artist – who has faced several death threats since his cartoon portraying the Prophet Mohammed as a dog was published in a Swedish newspaper in 2007 – has been in hiding after since the attacks in Copenhagen earlier this month which left two people dead.
"I am not surprised because this problem has occurred before [at other locations] but it is a really bad sign when threats and violence set the stage for what can and can't be done or said," he told The Local on Friday.
"This programme was about freedom of speech and when we can't actually stand up for it, this is a real loss," he added.
But Karlstad University insisted it's decision does not reflect a wish to limit debates in Sweden.
"We are not trying to stop the democratic process but we are concerned about security for our students and employees," said Ganbreng.
Speaking to The Local "from on top of a hill overlooking the Swedish countryside", Lars Vilks said on Friday that he remained under police protection in a secret location and suggested he was frustrated that he had not been able to meet face-to-face with journalists since the attacks in Denmark.
"I am getting out for some fresh air and exercise…but right now police haven't got any definitive answer about when I can come out of hiding or at least hold some meetings with people rather than just talking on the phone," he said.
News of the cancelled lecture broke as it was reported that a man accused of helping the main suspect in the Copenhagen shootings was being questioned.
Police said in a short press release that a young man was arrested shortly after 10.30am and had been charged with assisting gunman Omar El-Hussein, the 22-year-old Dane of Palestinian origin who is believed to have shot and killed a filmmaker and a Jewish security guard.
Reacting to the development, Vilks told The Local: "It is worrying to hear that there may have been some sort of organization behind these attacks."
But he said it was "often the case that people are not operating single handedly in events like these".