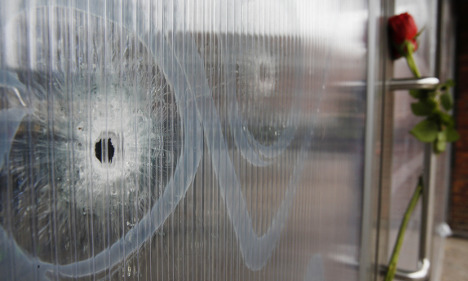 The window of the Copenhagen cultural centre where one man was shot. Photo: TT
Copenhagen Police on Friday announced a new arrest connected to the twin shootings on February 14th to 15th that left two men dead.
Police said in a short press release that the "young man" had been "charged with complicity in the perpetrator's actions" and would appear before a judge on Saturday for a custody hearing.
Public broadcaster DR reported that the arrestee was the brother of the presumed gunman Omar El-Hussein, but that was neither confirmed nor denied by police.
Two other men who allegedly helped El-Hussein were arrested shortly after the shooting attacks and have been ordered to be detained until March 26th. According to DR, all three men arrested are from the Mjølnerparken housing estate in Copenhagen, where El-Hussein grew up.
What we know about the key Copenhagen suspect
El-Hussein was shot dead by police after his shooting spree that sent fresh shockwaves across Europe after the Islamist attacks in Paris in January.
The gunman killed a Danish filmmaker outside a cultural centre hosting a debate on Islam and free speech before opening fire at a synagogue, killing a Jewish man. The presumed target of the first attack, controversial Swedish artist Lars Vilks, told The Local on Friday that it is "often the case that people are not operating single handedly in events like these".
El-Hussein had been released from prison two weeks before the attacks after serving a term for aggravated assault, raising fears he may have become radicalized behind bars.