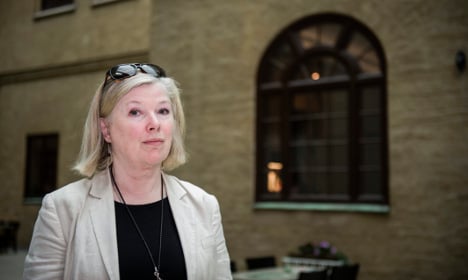 “Six prosecutors are enough, but eight police officers are far too few,” she said in an interview.

Her comments come a day after a 28-year-old Syrian man living in Sweden was sentenced to five years in jail for aggravated assault in Syria in 2012. The former Free Syrian Army fighter is one of just three people convicted in the Nordic nation over the past decade for crimes carried out abroad.

Around 30 investigations at the International Public Prosecution Office are currently pending, because there are not enough resources to deal with them, according to Holst. She said with current staffing levels she and her colleagues are only able to work on two to three cases at a time.

“We could, if we had more police officers, investigate many more, because some of the material concerns suspected war crimes in Syria,” she told SVT.

“It's very frustrating. The oldest investigation is from 2010 and it's a case we could delve into straight away if we had the resources. There's material online, there are people we could interrogate, we have suspects inside the country,” she added.

“I have never in my time as prosecutor seen these kinds of crimes. It's genocide, they're terrible things that we in Sweden are fairly unaware of.”

In total around 130 Swedes have travelled to Syria and Iraq to fight since summer 2012, but it has been reported the number could be as high as 300. Experts have warned the conflict could pose the biggest threat to Sweden since the Second World War.

Only two other people have been convicted of war crimes in Sweden. The first was Jackie Arklöv, a Croatian militant who in 2006 was sentenced to eight years in prison after torturing prisoners of war and civilians. He was already serving a life sentence for murder when the verdict was announced.

In 2011 a 44-year-old from Bosnia was sentenced to five years in prison for violent crimes committed abroad.