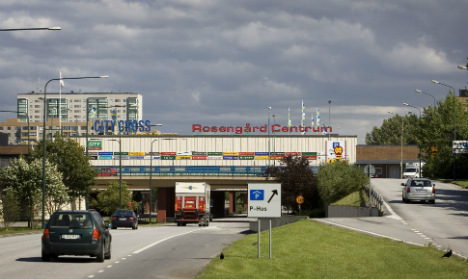 Photo: TT
Violence, threats and visits from adult criminals eventually became too much for the teachers' unions at Varner Rydén School in the Malmö suburb of Rosengård, whose safety officers have now closed the premises.
"Violence, threats and verbal abuse. There has also been trouble with students from other schools," said Hans Nilsson at the City of Malmö to news agency TT.
The responsibility now lies with the teachers' employer, the City of Malmö, as the school closure can only be waived by the Swedish Work Environment Authority (Arbetsmiljöverket).
The students at the school have been notified of the closure. But it is not yet clear where they will be placed.
"Fighting among the students means that security can't be guaranteed," said Catharina Niwhede at the National Union of Teachers in Malmö to the local Sydsvenskan daily.
The current dire situation has developed since the closure of nearby Örtagård School last autumn. Many of the school's students were relocated to Varner Rydén, bringing conflicts with them.
Hans Nilsson said that representatives of the school administration have tried to sort out the situation together with the principal and staff, but the situation has deteriorated to such an extent that a closure remained the only option.
"Some groups of students spread so much trouble that teachers can't handle it," Nilsson said.
The City of Malmö will now hire a security firm in order to make the school environment safer. Teaching staff will also be given help with security and conflict management.
Hans Nilsson also said that some students may be suspended from school, or transferred to other schools.