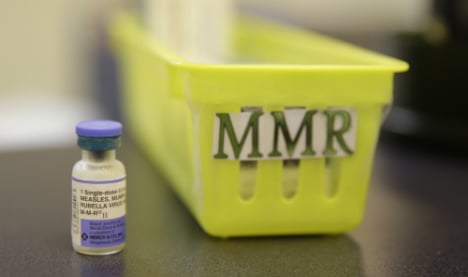 MMR vaccine. File photo: Eric Risberg/AP
The patient, who was unvaccinated, is reported to have been infected during a trip to Germany, according to the Infectious Diseases unit in Västra Götaland. Medical clinics in county have urged residents to be on their guard as the disease is extremely infectious.
"It was fairly expected that we would have cases here. If you are not vaccinated and spend time in airports or in large crowds for example in Europe or the United States then you run the risk of being infected,"  said Leif Dotevall, a specialist physician in Västra Götaland.
Dotevall however cautioned that the risk of a major outbreak in Sweden is very small.
"Vaccination protection in Sweden is very high. But we want people to "think" measles and about the protection they have."
According to Dotevall, Swedes born after 1960 are generally protected against measles. Of children born in 2010 some 98.5 percent have been vaccinated.
"There can be age groups which have missed out. It is possible to be receptive without knowing it. If you are in any doubt you should consult healthcare services and take the vaccination," he said.
The first symptoms are high fever, a severe cough and red eyes.
"In the flu season it can be difficult to recognize measles because the rash comes only two to four days after onset," Leif Dotevall said.
Since the beginning of last year, 22,000 cases of measles in seven European countries have been reported to the World Health Organization (WHO).
Measles is one of the world's most contagious diseases. Over 90 percent of those who come in contact with a sick person become infected if they lack the vaccination protection. Anyone who has been ill with measles has lifelong immunity. The most recent epidemic in Sweden broke out in 1919, when 43,000 people fell ill. The disease can lead to complications including, in about one per 1,000 cases, acute encephalitis, which can be fatal.