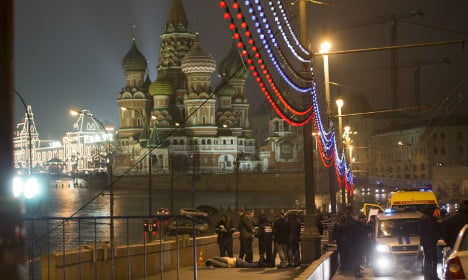 The body of Boris Nemtsov on a bridge near the Kremlin. Photo: Pavel Golovkin/AP

"I think everyone is deeply taken by the assassination of Nemtsov. It's an execution. And it is clear that this reinforces the image of Putin's reign of terror when it comes to security, human rights and democracy. This is furthermore one more name to be added to the already long list of, not least journalists, who have lost their lives," Margot Wallström said in an interview with the TT news agency.

In response to a question from a TT journalist whether she was blaming Russian President Vladimir Putin for the killing of the former first deputy prime minister and outspoken critic of the current Russian government, Wallström replied:

"It reinforces a picture where human rights are violated and where, unfortunately, we have seen many murders in recent years that have never been cleared up. There is also a clear picture of how those who are in opposition, and who are critical, are categorized as "you are against us and should disappear or be silenced."

"Putin's reign has become a reign of terror. This is serious and affects the rest of the world too," Wallström concluded.
Boris Nemtsov served as first deputy prime minister under Boris Yeltsin and was a renowned scientist and liberal politician. He was shot on Friday, aged 55, on a bridge near the Kremlin and Red Square in Moscow.
Nemtsov was co-chairman of the RPR-PARNAS political party and is reported to have been in Moscow to help to organize a rally against Putin's policies on Ukraine.
Margot Wallström's comments come at a time of heightened tension between Moscow and Stockholm.
The Swedish Armed Forces announced in October 2014 that they believed that a foreign power, widely presumed to have been Russia, was conducting operations in Swedish waters. The announcement led to a lengthy but ultimately futile submarine hunt in the Stockholm archipelago.
The government announced in December that Sweden was beefing up its military after a decade of downsizing in response to a more assertive Russia.
In one of Sweden's most dramatic steps since the end of the Cold War, Sweden has brought back the option of using reservists to boost its military force, making no attempt to hide the fact that the main motivation behind the move is Russia.
Defence Minister Peter Hultqvist argued the move was necessary against the backdrop of Russia's rearmament and its annexation of Crimea, as well as the Ukrainian conflict.
Sweden has however also come in for criticism recently for apparently agreeing to Russian military demands not to land fighter jets in Estonia during a coming military exercise in the Baltic region.