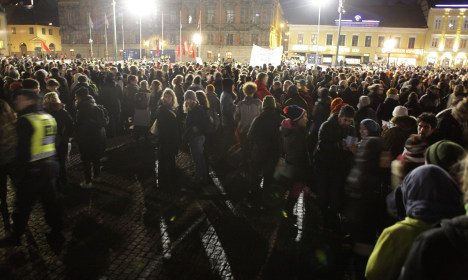 Counter-demonstrators at a Pegida rally in Malmö earlier this year. Photo: Drago Prvulovic/TT

Pegida supporters were dwarfed in numbers by thousands of counter-demonstrators when they held their first public demonstration in Sweden in Malmö on 9th February.

And police told newswire TT that they expect a similar scenario on Monday night.

"A counter demonstration has been given permission to take place. We think it will welcome more supporters," said Thomas Agnevik, police spokesman for the Östergötland region.

The local organizers of the Pegida rally dropped out earlier on Monday, but according to Swedish Radio the march is set to take place anyway.

Counter-demonstrators are set to gather at 6.30pm on the main square in Linköping, a couple of hundred metres from a separate square where the Pegida march will take place. Special officers and police dogs will attend, said Agnevik.

"Our goal is that both demonstrations should go ahead in a calm and safe way for all concerned," he told TT.

Pegida (Patriotic Europeans Against the Islamization of the Occident) rallies began in the German city of Dresden last year with several hundred
supporters and snowballed to reach 25,000 people on January 12.

But numbers have fallen since the movement's founder stepped down on January 21 after a picture surfaced of him posing as Adolf Hitler. Other senior figures have also since resigned.